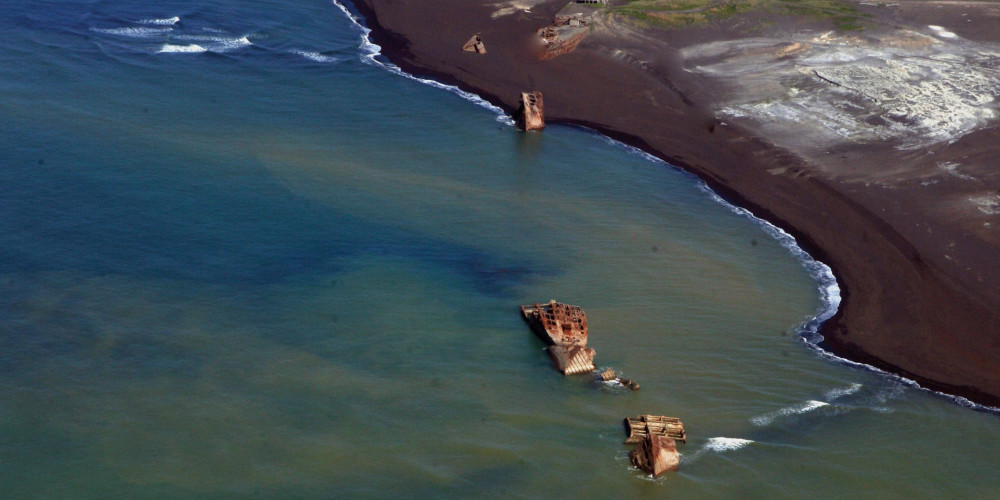 In the aftermath of one of World War II's most famous battles, 24 "ghost ships" were raised from the depths of the Pacific Ocean by seismic activity caused by an underwater volcano.

An All-Nippon News Network helicopter footage recently showed the ships being pushed up from the seabed by underwater volcano Fukutoku-Okanoba on the western side of Iwo Jima, approximately 760 miles south of Tokyo.

American forces sank the ships during the Battle of Iwo Jima in 1945. In a 36-day assault, approximately 70,000 U.S. soldiers engaged about 20,000 Japanese soldiers hiding in bunkers within the island's volcanic rock. 20,000 marines were wounded, and nearly 7,000 were killed. Few Japanese soldiers survived, and 216 were captured alive.

Ships that are smashed and sea-bleached are the remnants of transport vessels taken by the U.S. Navy and intentionally scuttled. To construct a breakwater on Iwo Jima, the ships were sunk parallel to the shoreline so that weapons and troops could be shielded from oncoming waves as they were unloaded or loaded onto the island, according to the National Archives of the United States.

In August, Fukutoku-Okanoba began erupting underwater. In addition to revealing the ships and the seabed on which they rest, volcanic activity has also caused a crescent-shaped island to rise from the ocean. According to Setsuya Nakada of the Japanese government's Center for Integrated Volcano Research, the island is expected to disappear shortly due to erosion.
Iwo Jima lies in the Pacific Ocean as part of the Bonin Islands, comprising about 30 subtropical islands. Subduction of the Pacific tectonic plate under the Philippine Sea Plate has created an island chain prone to earthquakes and volcanic eruptions.

The number of seismic events has increased in recent weeks, according to Japan's Meteorological Agency. On Oct. 7, a magnitude-5.9 quake was felt in Tokyo and eastern Japan. Nishinoshima is another island prone to volcanic attacks which have been spewing gas and lava since 2013.