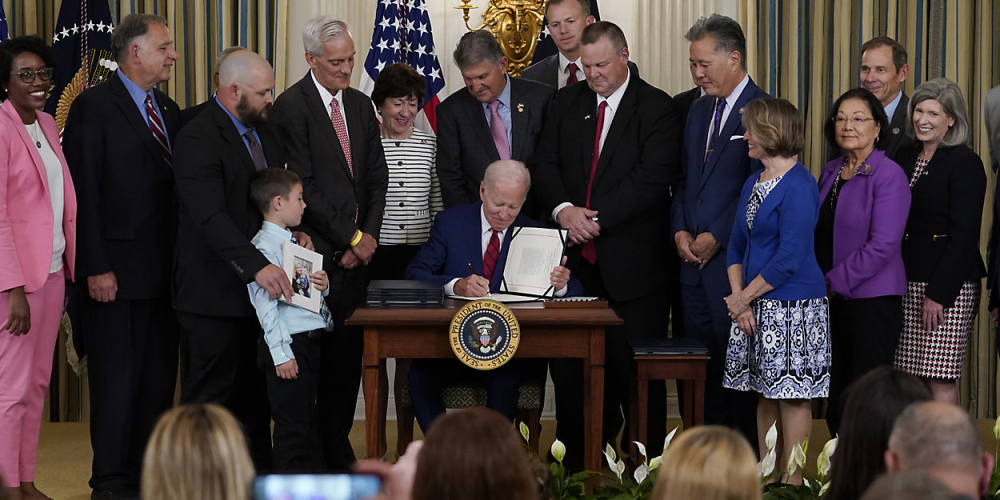 "I have said it before, but we have one truly sacred commitment," Biden said. "This is to prepare and equip those we send into harm's way and care for them and their families after they return home." This is a religious duty, and veterans are the backbone or spine of our country."

The president's nine bills were overwhelmingly bipartisan in their passage through Congress. Sens. Susan Collins of Maine and Joe Manchin of West Virginia were among the senators who came to watch Biden sign the bill into law.

Some of the bills are aimed at enhancing veterans' access to healthcare. The Dr. Kate Hendricks Thomas SERVICE Act extends mammography eligibility to veterans not exposed to hazardous burn pits, allowing more women to benefit from this potentially life-saving test. A separate law mandates a complete reorganization of the Department of Veterans Affairs' breast cancer screening and treatment services.

Another bill will extend a two-year program that compensates veterans who got "cancer and medical issues as a result of the nation's World War II-era nuclear programs," which is slated to expire next month, according to Biden.

The Bidens have a lengthy history of military service. President Joe Biden's son, Beau Biden, who Jill also raised, served in the US Army and the Delaware Army National Guard before dying of brain cancer in 2015.

Biden has signed several highly symbolic or commemorative bills in addition to healthcare legislation. One was to name the Daniel Kahikina Akaka VA Clinic, which is planned to open in Oahu, Hawaii. During World War II, Akaka served in the US Army Corps of Engineers, and Biden described him as a "wonderful friend" and "one of the greatest people I've ever served with."

The first Native Hawaiian to serve as a senator, he served in Congress as the House of Representatives from 1977 to 1991. In 2018, Akaka passed away.

Another bill will award a Congressional Gold Medal to all World War II Army Rangers, who "played a vital part in the D-Day invasion of Normandy," according to Biden.
The 78th anniversary of D-Day, when almost 160,000 men from the United Kingdom, the United States, Canada, and other countries liberated France from the Nazis, is Monday.