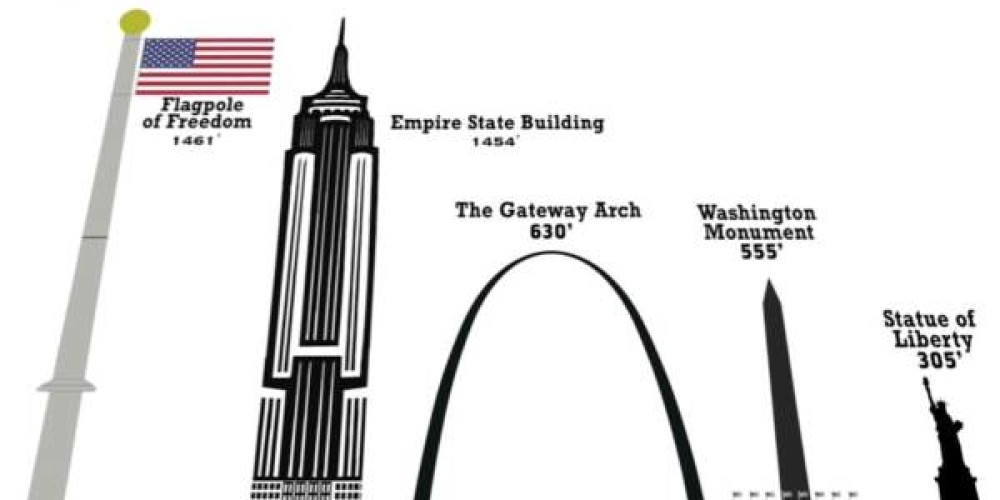 The founder of Wreaths Across America wants to build a massive memorial and tourist destination in Washington County that would feature the world’s largest flagpole to honor every American veteran in history.

Morrill Worcester and his family unveiled plans Tuesday for the “Flagpole of Freedom Park,” a proposed $1 billion, 2,500-acre park in the family’s forest in Centerville, about 5 miles north of Route 1. The focal point of the park would be a 1,461 foot tall observation tower — slightly taller than the Empire State Building — that would double as a flagpole and fly an American flag the size of one and a half football fields.

The Worcesters also hope to erect nine miles of remembrance walls displaying the names of veterans, six history museums, and a development with a hotel, restaurants and shops and a 4,000 seat event venue.

“Our goal is to produce a symbolic and world-class destination that is apolitical and inclusive to all Amerians,” said Rob Worcester, Morrill’s son. “This park will educate future generations on the sacrifices that previous generations made to give us all the freedoms that we enjoy today.”

The flagpole would be 7 feet taller than the spire at the top of the Empire State Building and, if ever built, would tower over the observatory at the Penobscot Narrows Bridge, which, at 420 feet of elevation, is the tallest occupied structure in Maine. The Worcesters plan to have two observation decks on the tower, one 330 feet off the ground and another at the top.

While the tower may be the most visible part of the park, the family hopes that people will stay and visit other veterans memorials around the park.

“We want to build the giant flagpole to draw people in, but what’s important once they are here is the remembrance walls,” said Mike Worcester. “No one has ever honored [every veteran in American history] in one place.”

The family expects the park to make rural Washington County a destination for people across the country, and possibly the globe.

“I think the popularity of this is going to be contagious, just like the COVID virus but better,” Morrill Worcester said at an Augusta press conference Tuesday. “It’s going to spread right from coast to coast.”

The attraction would be the latest, and by far the most ambitious, of multiple projects the Worcesters have developed or made possible on land they own in or near Columbia Falls.

In 2014, they opened the Balsam Valley Amphitheater outdoor music venue on Route 1. In 2019, the federal Department of Veterans’ Affairs opened Acadia National Cemetery nearby, just across the town line in Jonesboro on land donated by the Worcesters.

The veterans’ historical park idea has been in the works within the family for more than 10 years and drew praise from officials in Washington County, who said the project could expand tourism outside of the summer months and stop the outgoing tide of young people in the economically challenged area.

“We need a solution to reverse these trends or Washington County’s young people will continue to leave in search of meaningful work,” Sen. Marianne Moore, R-Washington, said. “Flagpole of Freedom park not only will honor our veteran-rich heritage but will create abundant opportunities for our area to thrive.”

Such a project would have to go through miles of red tape – everything from a local building permit to approvals from the Federal Aviation Administration to a possible annexation of the land into the town of Columbia Falls to streamline the permitting process. The family says it’s currently in the planning stages and pre-construction phase and has amassed a team of engineers, architects, planners, and other professionals to carry out the project.

The Worcesters plan to fund the project through private investment, corporate partnerships and a “park foundership” program. People can buy lifetime access to the park through the program for $660 to $1,800.

Some items, such as trips to the top of the flagpole and museum visits will be ticketed, but most of the park will be free to the public.

No permits or applications have yet been filed, though the Worcester family, which has been laying wreaths on veterans headstones and memorials at Christmas for years and helped bring a veteran cemetery to Washington County, said it has talked to several state agencies and expects permitting to take about a year.

The family estimates it can get the first phase of the project, which would include the flagpole, memorial walls and village, done in time for July 4, 2026.