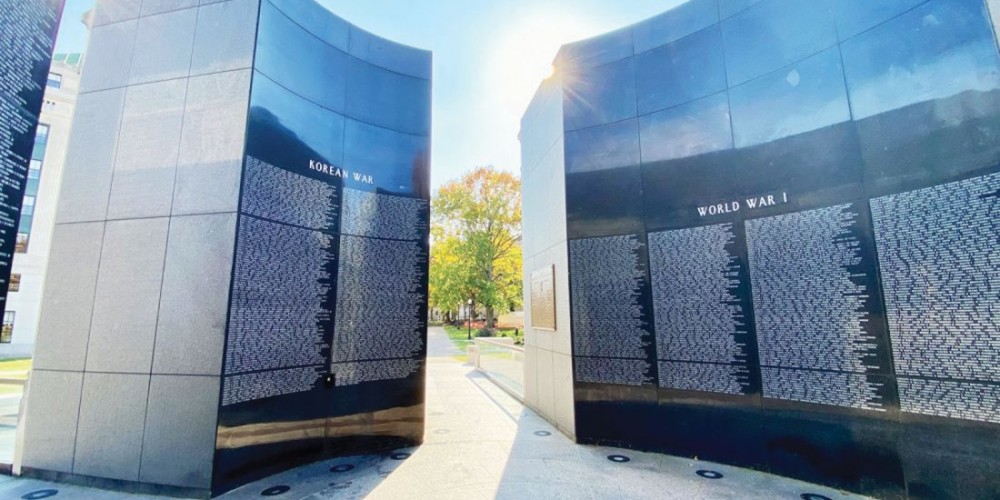 Citing decreasing need for services as West Virginia’s aging veterans pass away, the U.S. Department of Veterans Affairs is considering reducing services at the state’s three VA hospitals and limiting access to other services.

State and federal officials are working to make sure those recommendations never happen
In the middle of March, the VA released its Asset and Infrastructure Review (AIR) report. It is required by the VA MISSION Act passed by Congress in 2018. Among the bill’s provision, the

The VA recommended the approximately $2 trillion AIR proposal on March 14. According to Military.com, the VA proposal involves closing as many as three medical centers and 174 outpatient clinics while also creating 255 new healthcare facilities focused on rehabilitation, long-term care, and other services aimed at older veterans.

“VA came to these recommendations by asking ourselves one question above all else: what’s best for the Veterans we serve? Because that is our number one goal, today and every day,” said VA Secretary Denis McDonough in a statement. “We’ve spent the last several weeks and months communicating about this with VA employees, union partners, state partners, Veteran service organizations, Congress, and more. I’m continuing to consult with our unions, and will do so moving forward, because I so appreciate the strong partnership, we have with them.”

As part of the AIR recommendations, services for veterans in West Virginia would be severely impacted, effecting all three VA medical centers in the state: Huntington, Beckley, and Clarksburg. Edward “Ted” Diaz, secretary of the state Department of Veterans Assistance, said during an interview Thursday in his office on the grounds of the State Capitol Complex that he was in shock when he saw the AIR report.

“To say I was surprised would be an understatement,” Diaz said. “My jaw hit the floor; my face went ashen white. I couldn’t believe what I was reading. My first thought as soon as I read off all of the assessments for West Virginia was they were, for lack of better term, gutting the services that the VA provides in West Virginia.”

The report also made other recommendations, including establishing new community living centers at the Huntington and Clarksburg VAMC, establishing a new residential rehabilitation and treatment in Charleston, moving the Lenore-Williamson other outpatient services (OOS) facility to Chattaroy, relocating the Charleston multi-specialty community based outpatient clinic (MS CBOC) to a new location in Charleston and establishing a new MS CBOC near Buckhannon, relocating the Westover community based outpatient clinic to a new location, and closing the Parsons OOS facility.

The VA recommends constructing a new VA Medical Center to replace the Beckley VAMC, but the new facility would not offer the same inpatient medical and surgical services. Instead, the new Beckley VAMC would have a new community living center, adult day care, and offer non-surgical outpatient services.

“The main hospital building was built in 1950. The aging infrastructure of the VAMC suggests the need for modernization to support ongoing Veteran care and clinical services,” the report stated. “The new, modernized Beckley VAMC will provide the non-surgical outpatient services most needed in the market. Inpatient medical and surgical services and outpatient surgical services will be provided through strategic collaboration with a community provider.”

Again, the VA would seek partnerships with private and for-profit hospitals and healthcare facilities to replace inpatient medical and surgical services, including discontinuing emergency department services. It would also build a new facility for other outpatient services near Summersville, increase access to home-based private care and explore broadband expansion to offer telehealth services.

The AIR recommendations are based, in part, on projections on future demand for services. According to the VA, the Huntington VA Medical Center serves a 23-county market in West Virginia, Kentucky, and Ohio, with 31,748 enrolled veterans as of fiscal year 2018. Nearly half of all enrollees come from rural areas, and 57.4 percent of enrollees live within 30 minutes of a VA primary care site.

More than 70 percent of the 14,964 veteran enrollees in the 10-county Beckley market that serves parts of Southern West Virginia and Western Virginia are rural, with Beckley VAMC primarily serving Raleigh, Mercer, and Fayette counties. Nearly 45 percent of enrollees live within a 30-minute drive of the facility. The AIR report projects a 13.9 percent decrease in demand for inpatient medical and surgical services and a 21.3 percent decrease in demand for long-term care.

The Clarksburg market serves 22,189 veteran enrollees with 80.4 percent residing in rural areas and 58 percent living within a 30-minute drive of the VA hospital. Demand for inpatient medical and surgical care is projected to decrease by 22.5 percent, while demand for long-term care is projected to increase by 3.7 percent by the end of the decade.

The changes don’t just affect West Virginia’s VA hospitals. It would also affect the availability of services for West Virginia veterans in the Northern Panhandle and Potomac Highlands who receive VA services. Veterans who receive specialty care services and long-term care services at the Pittsburgh-University Drive VA Medical Center would be directed toward local medical providers. Veterans affected would include residents of Marshall, Ohio, Brooke, and Hancock counties.

“These counties lack enough Veteran enrollees to sustain VA points of care, and enrollment is projected to decrease by 14.8 percent in the Western Market between FY 2019 and FY 2029,” the report stated. “Local community sources of care will improve access for Veterans so they do not have to travel for locally desired services.”

In the Potomac Highlands, the report recommends relocating all services at the OOS facility in Franklin in Pendleton County and closing the facility.

“I guess they’ve never been to Franklin and the eastern mountains of West Virginia,” said U.S. Sen. Joe Manchin, D-W.Va., by phone Thursday, “Where in the Hell does Franklin go? Are they going to go to Virginia?”

Diaz was on Capitol Hill this week meeting with members of West Virginia’s congressional delegation regarding concerns about the AIR report, including 1st District Congressman David McKinley, R-W.Va.
“What we are trying to ascertain is how does this benefit our veterans,” McKinley said in a phone interview Thursday. “I want to make this whole process for our veterans to be able to have access in an affordable way to get their healthcare. If it’s allowing them to go to other facilities, fine, but what are we doing with our (VA medical centers)? We have four for a population of 1.7 million. It’s because we have such a high concentration of veterans.”

According to the U.S. Census, West Virginia has 125,084 military veterans, making up 8.7 percent of the state’s population. The U.S. average veterans population is closer to 7 percent. West Virginia veterans range from 3,238 World War II veterans to more than 49,000 Vietnam veterans. There are nearly 24,000 veterans between the first Persian Gulf War and the War on Terror in Afghanistan and Iraq.

Another concern is the likely reduction of staff at the VA medical centers if services are reduced. McKinley said while regular hospitals and healthcare facilities would be able to treat veterans, VA medical centers provide more expertise in the specific healthcare and mental health needs of veterans.

“There are doctors who work in the medical centers that have specialized experience,” McKinley said. “How often do you run into (post-traumatic stress disorder) caused by combat at Ruby Memorial Hospital? They have training with head injuries, Agent Orange and exposure to leukemia that is unique to Agent Orange … There is some specialized training, and that’s going to be gone if these recommendations happen. I can’t find in the report how they quantify how that doesn’t have value.”

However, the members of the AIR Commission have yet to be appointed because they have not been formally submitted to the Senate for confirmation yet. Last month, Manchin — a member of the Senate Veterans Affairs Committee – joined U.S. Sen. Mike Rounds, D-S.D., in writing a letter to President Joe Biden raising concerns that the recommended AIR Commission members all come from urban areas with little to no expertise on rural regions, such as West Virginia.

“They’re evaluating what they want to downsize or close,” Manchin said by phone Thursday.
“What we are absolutely upset about is they do not take into consideration healthcare needs in rural America. That goes for our veterans and everyone else in society.”
Manchin said he and Rounds recommend that no item in the AIR report be implemented until vetted by the Health Resources and Services Administration and the Rural Health Council within the Center for Medicare and Medicaid Services.

“That’s our recommendation. That will basically give them a true evaluation of what goes on and the needs we have in rural America,” Manchin said. “If they stick with that, we’re going to be pushing to make sure rural America does not get left behind and we don’t get left behind with three or four of our hospitals that are giving total care right now.”

“They just did a big thing at the White House talking about expanding it and making sure we have coverage for people and help more people,” Manchin said. “Now all of sudden they’re talking about taking services away from the people that basically gave the most and sacrificed the most. It’s just ridiculous … we’re going to fight like Hell like we always do in West Virginia and they’re not going to leave us behind.”

Diaz, a Huntington native and a 20-year veteran of the U.S. Navy before retiring in 2007, is a former staff member of the VA. He is also the chairperson for the public and inter-governmental affairs committee of the National Association of State Directors of Veterans Affairs. Diaz is working on a letter on behalf of NASDVA expressing their displeasure with the AIR recommendations.

As a veteran himself, Diaz also uses healthcare services offered by the VA. He said the AIR recommendations go against the core mission of the VA of “… serving and honoring the men and women who are America’s Veterans.”

“This is what the VA is supposed to do. This is why it was created,” Diaz said. “There is a big sign, a big plaque outside the VA’s central office in Washington that says ‘for those for have borne the battle.’ This action goes completely against what that stands for; what those words that Abraham Lincoln uttered stand for. I knew I had to make a stand.”
Source: https://www.newsandsentinel.com/news/local-news/2022/04/plan-draws-fire-west-virginia-veterans-healthcare-options-limited-in-proposed-va-hospital-changes/