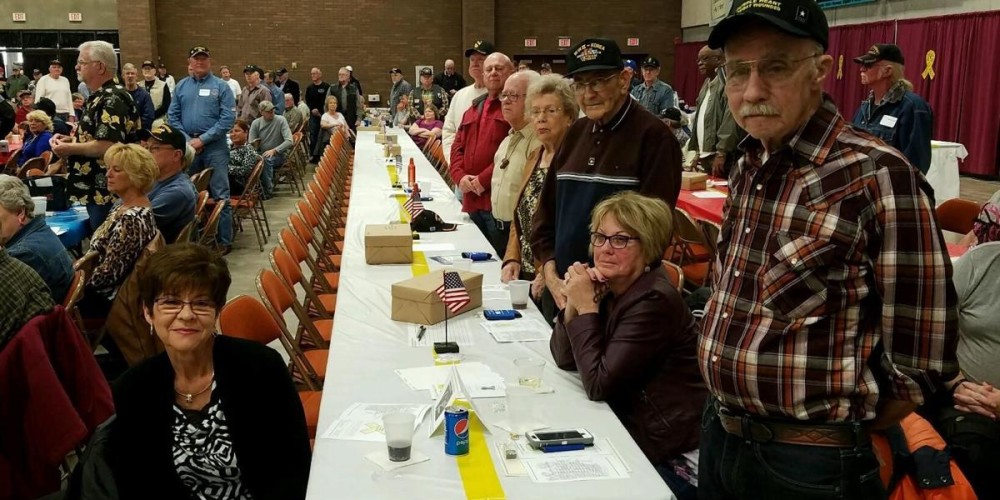 One by one, as Vietnam War veterans entered the sanctuary at Candlelight Christian Fellowship on Tuesday, they said their name into the microphone, as reported by our news partners, the Coeur d'Alene Press.

It continued as about 150 men and women walked in. Some used canes. A few were in wheelchairs. Some said their name quietly. A few shouted “Semper Fi!” Others cried “Hoorah!”

The greeting from the adoring crowd was the same: Applause. Cheers. Smiles.

It was an overdue welcome home.

“Many of these veterans returned home with little or no fanfare or expression of appreciation,” said Barb Nelson, event chair with Lt. George Farragut Chapter of The Daughters of the American Revolution. “Many were treated very disrespectfully. We welcome them now as they should have been welcomed.”

It was attended by about 350 people and livestreamed for those at home.

Henry Gallego, who served in the first Combat Battalion in Vietnam and served from 1965 to 1969, said the event “was healing.”

“I’m very thankful for that,” the Priest River man said.

In Vietnam, Gallego said he crawled through small tunnels, bringing back bodies while facing cobras, scorpions, spiders and the Viet Cong.

The enemy was hard to find. He said they dug tunnels with small hatches. They would open them a few inches, shoot advancing Marines and disappear.

The reward for his service?

When he returned home, people spit on him and called him names.

“All we ever got when we came back from Vietnam was ‘Go back baby killers,’” Gallego said.

He said he suffers from PTSD, but remains proud of his service.

“I’ve always been a Marine,” he said.

“I think any recognition to any veteran of any war deserves a little thank you. It’s appreciated,” he said.

The United States of America Vietnam War Commemoration honors veterans who served on active duty in the U.S. Armed Forces at any time from Nov. 1, 1955 to May 15, 1975, regardless of location.

The Department of Veterans Affairs estimates there are more than six million U.S. Vietnam veterans living in America and aboard.

Gail Richison of Post Falls, whose husband Tom Richison served in the Army from 1970 to 1974, said, “It’s amazing what Idaho does” to honor veterans.

She said her husband was recently in a store, wearing his military cap, and a young man told him, “Thank you for your service.

“My husband almost fell over. He didn’t know what to think because it never happened before,” Gail Richison said. “It happens here all the time.”

Dean Morfitt of Coeur d’Alene served with the 10th Mountain Division from 1986 to 1989.

He said the ceremony gave soldiers a chance to share their stories. It lets them know they’re not alone and helps them deal with the death and destruction that they survived.

“I think it’s a way to take some of the weight off of the veterans,” Morfitt said.

He said it’s important for the younger generation to learn about the Vietnam War, those who fought it and how it affects them today.

David Morgensen was a combat salvage diver with the Navy from 1965 to 1970. Tuesday’s celebration, he said, “was a long time coming. Well presented. It gives us a good feeling.”

Retired USMC Lt. Col. Kenny Moore said it was wonderful to be recognized.

“That was the first time I’ve ever been thanked for what happened in Vietnam,” he said.

Moore said they never lost a battle in eight years.

“We lost the war because of politicians. All of us feel the same way,” he said.

Nelson was delighted with how the day went and that so many veterans were honored.

“I'm really proud of all the Daughters of the American Revolution and their dedication to make our event such a success,” she said.