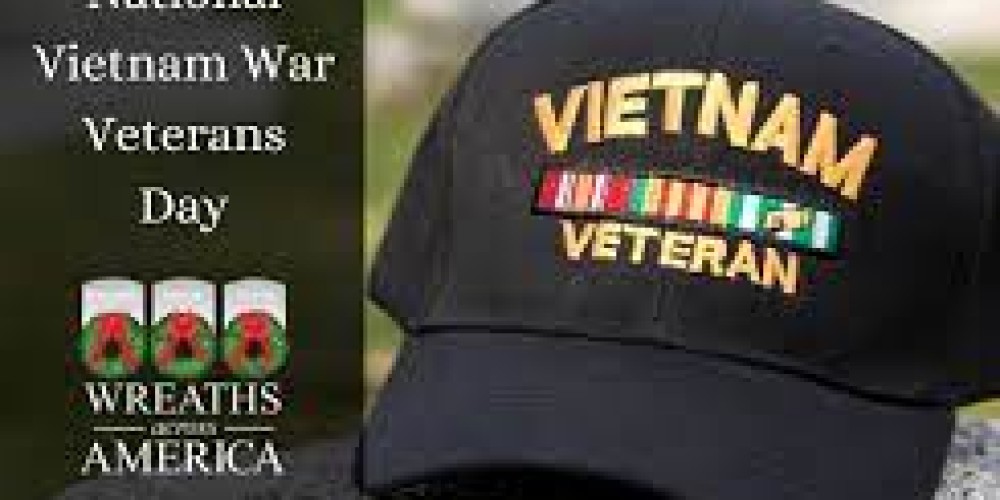 Eight Vietnam War and Vietnam-era veterans were recognized for their service Friday during a stop by the mobile education exhibit of Wreaths Across America.

The exhibit, designed to raise awareness of Wreaths Across America, is traveling across the country, and its stop at Uptown Hot Springs on Friday was sponsored by the John Percifull Chapter of the National Society Daughters of the American Revolution.

The veterans attended the opening of the exhibit, which was in Hot Springs for just one day, and Stefan Brann, driver/ambassador for Wreaths Across America, recognized and honored the eight during the stop in Hot Springs.

"These men and women who served during the Vietnam War were never properly welcomed home. They were basically shunned when they came back to the United States and it took us over 50 years to realize our mistake, and now we're doing this and they're appreciative of it," he said.

After the veterans toured the exhibit, Brann, with help from fellow ambassador Jennifer Merrill, presented each with a lapel pin and a challenge coin.

"I can't stress the importance, and it's so important, that World War II to Afghanistan, those men/women that served, they need to know that they're appreciated, living or passed, and if we can take that chance to say thank you to them whether it's by laying a wreath or shaking a hand, that's important," Brann said

The exhibit has traveled across the country since it was created two years ago.

"We've been as far as California last year, New Mexico, Arizona, some of Nevada, Utah. This year we'll go to Washington State, Oregon, Michigan, taking a different route each year but we're covering territory as we can," Merrill said.

This was the exhibit's first trip to Arkansas, and Hot Springs was its fourth stop in the state, Merrill said.

"I think it's amazing. Everybody's been so happy to have us and they've been super excited, welcomed us wonderfully. At every event we've had an absolutely fabulous time," she said of their visit to Arkansas.

"This has become my passion. It is the greatest organization that I've ever worked for, it means so much to so many different people, but to honor our veterans is the main goal," Merrill said.

"We're educating the community about Wreaths Across America and what our mission is, which is 'Remember, Honor, Teach,' helping out the local cemeteries, the local coordinators, raise the awareness from the community so they get more help with their sponsorships. Spreading the word so that there's, you know, more people who understand what we do so we can get those veterans' graves covered and honor those veterans," Merrill said.

Gail Davis, chair of the event, said, "Wreaths Across America is a nonprofit organization that places wreaths on the graves of veterans and they have been doing it at the national cemeteries all around the United States and then have been branching out into local cities. This past Christmas, our chapter of the DAR, here in Hot Springs, places 238 wreaths on the graves of veterans here in Hot Springs at the Memorial Gardens of Hot Springs cemetery."

"We all know people who have served in our military. We all know those who have passed away as a result of their military service, killed in combat or even years after," McCabe said.

"My father and father-in-law both served in World War II. Back when my father was visiting me in the early '80s here in Hot Springs, we were walking down Central Avenue and he pointed to the Army Navy Hospital and said that 'I had my physical there going into World War II,' and I had no idea because he was raised in Fond du Lac, Wisconsin," McCabe said.

"I have not served in the military, though my son is a graduate of the United States Naval Academy and selected the Marine Corps and served there admirably to the rank of captain and left and got married and started doing other things, so we appreciate his service and all those who have gone before him and all those who will go after him," McCabe said.