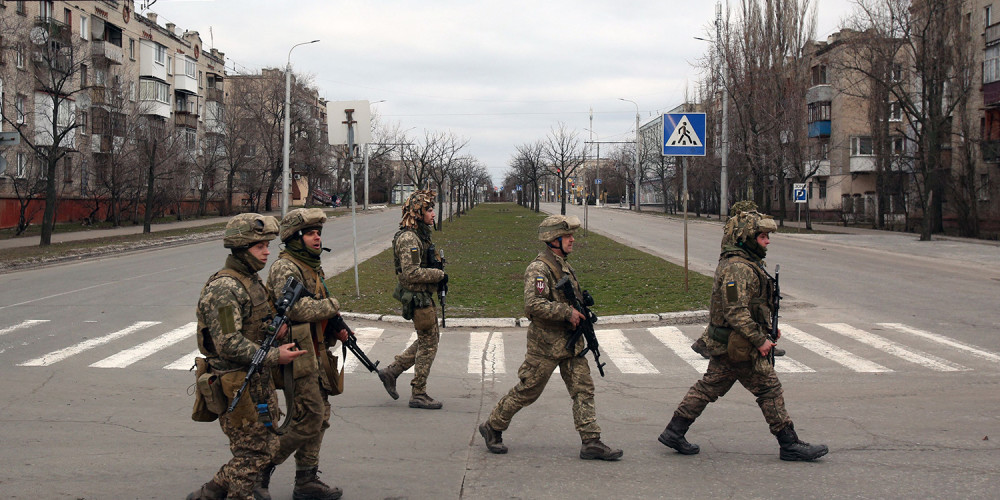 Matthew Parker spent 22 years in the military, visiting half a dozen countries and working with other armies, include those in the U.K. and Iraq.

His recent day-to-day, however, hasn't exactly been dangerous. A 50-something Army veteran, Parker lives in Columbia, South Carolina, and is married with four adult children.

But watching the situation unfold in Ukraine — where Russia's attack on the country continues after its forces launched a large-scale invasion on Feb. 24 — Parker could only think one thing, he told PEOPLE: "I should have been there weeks ago."

Details of the fighting in Ukraine change by the day, but more than 3,000 civilians have been reported dead or wounded, including more than 100 children, the United Nations says. More than 3 million Ukrainians have also fled.

Now, as Parker explained in a recent interview, he wants to leave for Europe "as soon as possible."

"I am a professional soldier. This is what I do," he said. "I'm a soldier, and I hate bullies. I hate liars. And [Russian President Vladimir] Putin is both."

Parker is one of hundreds of Americans who have contacted Ukraine's embassy in Washington, D.C., eager to assist the country as it fights against Russian invaders.

Their battle plans, however righteous many of them feel — though there are also reports of volunteers with murkier ties and goals — are also fraught, and the U.S. government has explicitly warned against Americans joining up.

The process has logistical challenges, too. Parker, for his part, later told PEOPLE that "Ukrainian red tape has kept me here in the States," and by late March he said he planned to try again by heading to Poland.

Ukraine has sent conflicting signals of its own: Their foreign minister solicited volunteers to assist with the fighting days after Russia invaded in February.

"Foreigners willing to defend Ukraine and world order as part of the International Legion of Territorial Defense of Ukraine, I invite you to contact foreign diplomatic missions of Ukraine in your respective countries," the minister wrote on Twitter. "Together we defeated Hitler, and we will defeat Putin, too."

Later, however, the embassy in D.C. told PEOPLE it would no longer be commenting on the process of reviewing and facilitating U.S. citizens to fight for Ukraine overseas.

Parker took the foreign minister's social media solicitation as a desperate cry for help, he told PEOPLE: "He put aside his ego, and he said, 'We're in a fight for our lives. And we need professional soldiers.' And that was key to me."

Retired Army officer Ken (who asked to only use his first name, as he did not want to expose his team to the Russians) was also among those who said they wanted to head to Ukraine. Speaking recently with PEOPLE, he noted that an open call for soldiers could lead to all sorts of people showing up.

"Whenever you have conflicts like this, you're gonna have a hodgepodge of everybody," Ken said. "You get the adventure folks, the wannabes, the folks that have no business going over there to, you know, the idealistic former veterans, from guys who serve one tour to guys who did 20 years in special operations."

On the younger side of the prospective volunteers is Angelique Osmon, a 30-year-old Army vet who served as a generator mechanic and later went to Iraq to fight against the Islamic State. Now a college student in Denison, Texas, she told PEOPLE she recently joined a group called the Legion of Lviv Lions, which she described as a multinational troop and "a bunch of ex-veterans" that have banded together against one common enemy.

Osmon said in a recent interview that she was en route to Ukraine but couldn't say exactly where she would end up: "I'm just going to go where I'm needed, is the short answer."

In late March, she told PEOPLE she had arrived in Lviv after spending some time in Poland helping people who had fled. Osmon said her plan was to make her way to Kyiv, the capital and seat of Ukraine's embattled government.

According to Ukraine's military attaché in the U.S., Maj. Gen. Borys Kremenetskyi, approximately 6,000 people said in the initial weeks of fighting that they were eager to take up arms against Russia, calling them "people of goodwill who are coming to assist Ukraine to fight for freedom" in an interview with the Associated Press published on March 10.

"They really feel that this war is unfair, unprovoked," Kremenetskyi told the AP. "They feel that they have to go and help."

The AP reported then that there were more than 20,000 foreigners joining the International Legion in "defense of Ukraine, Europe and the world."

The U.S. State Department, however, is not eager for any U.S. citizens to travel to Ukraine to engage in combat — which could lead to them being captured, killed or used for political propaganda purposes or recruited and radicalized by other groups, officials warn.

In an advisory posted to its website, the department said that although it was "not a crime under U.S. law for an individual to go abroad for the purpose of enlisting in a foreign army," it could be a violation if that person was recruited or hired in America — and could even be grounds for "the relinquishment of U.S. citizenship."

"The United States, as you know, is not able to provide assistance to evacuate U.S. citizens from Ukraine, including those Americans who may decide to travel to Ukraine to participate in the ongoing war," State Department spokesman Ned Price said in March. "In addition to those other risks to personal safety — and this is a point we want to underscore — U.S. citizens should be aware that Russia has stated that it intends to treat foreign fighters in Ukraine as 'mercenaries,' rather than as lawful combatants or prisoners of war."

Speaking to reporters on March 11, Price said that U.S. citizens who travel to Ukraine — especially with the purpose of participating in fighting — "face significant risks, including the very real risk of capture or death."

Still, they say they are going anyway, with retired Army officer Ken telling PEOPLE that he had heard of Americans just "showing up" in Ukraine with their military kit — body armor, helmets and medical packs — in tow.

Others said they were employing a different tactic, sending gear over to help the fighters rather than trying to enter the fray themselves.

Marine Sgt. Jon Barton served until 2012. Now he owns a production company that provides uniforms and realistic weapons to the film industry. He recently told PEOPLE he planned to go overseas to help and was sending gear to the resistance in Ukraine.

Barton, 44, said he planned to travel "at least" to Poland, where he could manage the logistics of getting the gear delivered.

"I was watching everything going on and I'm like, 'Where's the humanity?' We have to really be cognizant of the human factor here," Barton told PEOPLE. "I just happened to be in a position where I had the exact stuff that was on a wish list from the Ukrainian military."

Barton said he was also cognizant of the State Department's stance and the risks to foreigners looking to get involved, noting that an American soldier would be a useful asset to Russia. "You know, if I'm there and they're coming after me to catch me and I'm more valuable to them alive as a bargaining chip ... that just that makes it all the more dangerous."

New York-based Army veteran Steve — who also asked that his last name not be published — recently told PEOPLE he was planning to arrive in Poland on March 22 and enter Ukraine from there.

At 62 years old, Steve acknowledged that he was "a little older" than other veterans headed to Ukraine but was motivated nonetheless. He told PEOPLE his plans had initially been delayed because of a family emergency (his father got sick) but that he intended to eventually make his way over. "I'm obliged to be here for the time being," he said. "I can't tell you how much I was pulled in two very different directions."

While Steve said he would travel to Ukraine for the purpose of assisting in humanitarian efforts, he would also fight if asked: "I know how to fight. I just learned it through my whole life. And if it comes to it, I will certainly do that. If they ask me, I will go."

Steve initially said he was heading to Ukraine alone, though he planned to link up with contacts while there. Anticipating the chaos and lack of equipment for volunteers, he said he had thought ahead, stopping at an outdoor supply store to purchase "a sleeping bag, a shelter, a heat blanket, and a fire starter." He planned to purchase body armor once there but, until then, would wear his old helmet plus "a police body armor vest that I put between two T-shirts."

Everything, he said, would be marked with "B-positive": his blood type.

Former State Department support officer Laura Engelbrecht served as a "combat civilian" in Congo but was rejected by the International Legion to fight in Ukraine, she said. She opted instead to form a nonprofit to help volunteers.

"They told me that they had had 16,000 applicants, and I was the only woman. And so I got turned down, even though my combat and weapons qualifications were fine," Engelbrecht, 43, tells PEOPLE. "I had kind of anticipated that that might happen. But I have such a broad network with former vets that have been volunteering or interested in volunteering, but are confused by the process, that I ended up pulling a small group of people together."

Engelbrecht's new nonprofit, Warriors Without Borders, planned to launch what she called a "virtual operation center" and had been fundraising for basic necessities such as warm clothing, socks, medical kits and water filtration devices.

She said she was also planning a trip to Poland to set up a transit spot for former vets intending to enter Ukraine to volunteer in the fight against Russia.

"One of the things that we're trying to do is set up a place where American volunteers can check in, and we can make sure they have the right equipment and supplies and they can leave a copy of their passport and emergency contact info," she told PEOPLE recently, "so that if they disappear or if something happens to them, we can serve as a point of contact to do emergency notification to their family or to be a liaison."

Marine combat vet Dennis Diaz offered a similar assessment, initially saying he was planning to leave for Ukraine in late March after filling out a questionnaire via the Territorial Defense of the Armed Forces of Ukraine.

The 39-year-old father-of-four said he had assigned someone to care for his boys if something happened to him.

"I am ready to ship out ... and am awaiting word to hop on the plane," he told PEOPLE. He leaves on Friday, he said.

"Once they started killing women and children, innocent civilians, that doesn't sit right with me," he said. "And as a Marine combat veteran, and as an American ... I said, 'No, I'm going to do something about it.' "