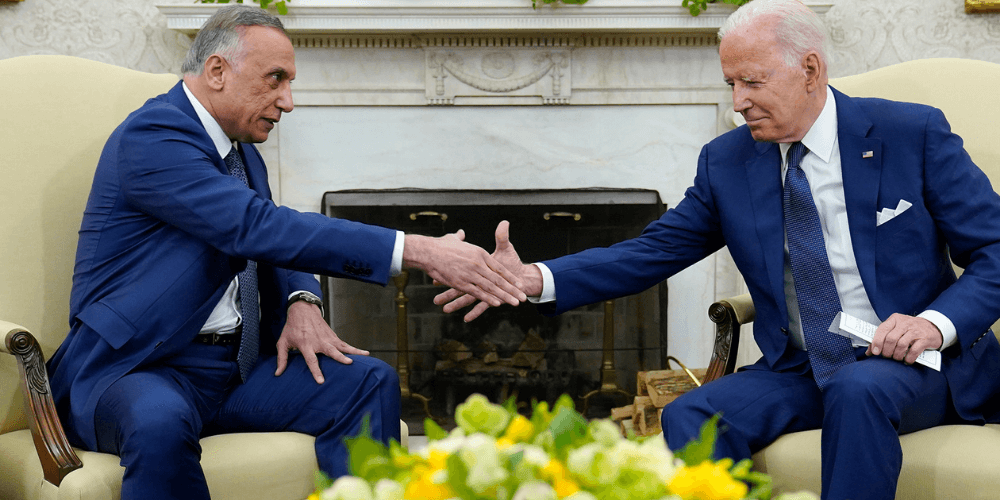 The United States will formally end its combat mission in Iraq by the end of the year, President Joe Biden announced Monday. Biden said the two nations will continue to work together in the fight against the Islamic State despite the drawdown.

“Our role in Iraq will be ... to be available to continue to train, to assist, to help and to deal with ISIS, as it arrives,” Biden told reporters in the Oval Office.

“It's critical for the stability of the region, and our counterterrorism cooperation will continue, even as we shift to this new phase we're going to be talking about. But we're not going to be, by the end of the year, in a combat mission.”

Roughly 2,500 troops are in Iraq after a troop reduction ordered by then-President Donald Trump last year in an effort to transition the U.S. from a leadership to supporting role in the ongoing war. Despite the president pushing for a full reduction, a senior defense official told reporters at the time that the Pentagon, commanders and national security officials concluded that 2,500 personnel were necessary to safeguard the mission.

The Pentagon did not respond to a request for comment for how that footprint may change in coming weeks or which units would remain behind in an advisory capacity.

U.S. officials have several times denied it was leaving the country -- most recently last week when the BBC reported that Brett McGurk, the National Security Council’s top coordinator for the Middle East and North Africa, told Iraq counterparts the withdrawal was near.

Iraqi officials stated the U.S. overstepped its security agreement when it took the action, escalating tensions with Iran. The fallout from the strike forced the U.S. and Iraq into strategic negotiations that included the eventual U.S. withdrawal from Iraqi soil.

Then-president Barack Obama ordered troops to come home in 2011 -- eight years after the invasion that was billed as an effort to find and destroy weapons of mass destruction developed by Saddam Hussein’s regime. Those supposed weapons were never found.

In 2014, Obama ordered the return of U.S. military fighter jets and bombers to break apart ISIS strongholds and reclaim territory, which included bombing campaigns in Syria.

The campaign saw more than 5,000 troops through 2018 before steadily reducing personnel in the region.