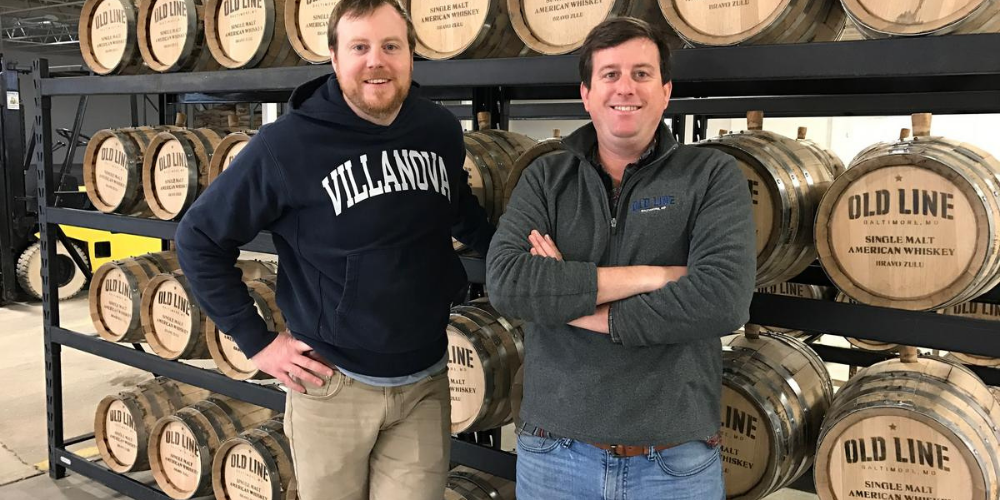 Mark McLaughlin and Arch Watkins are both naval aviation veterans. McLaughlin has a background in business and finance, while Watkins is a trained engineer. Separately, those are valuable skills in today’s workforce. Together, it meant a booming distilling business.

After leaving the Navy, the duo took a chance on themselves and the fields in which they’d been training for so long. A chance meeting with a Vietnam veteran opened the door to the distilling industry, where they turned a passion into a business: their own line of high-quality spirits, made at their own distillery.

“I was an investment banker for a couple of years,” McLaughlin told Military.com. “Arch became an engineer after leaving active duty. We both found our way into deciding that whiskey was the right next step.”

Baltimore’s Old Line Spirits gets its name from the Marylanders who fought with Gen. George Washington at the Revolutionary War Battle of Long Island. When Washington needed to conduct an orderly -- but hasty -- withdrawal to Manhattan, hundreds of Maryland troops, nicknamed “The Old Line,” repeatedly assaulted thousands of British troops to give the Americans time to depart.

After the revolution, Washington dubbed Maryland “The Old Line State,” still one of its official state nicknames.

When McLaughlin and Watkins left the Navy, they, too, were Marylanders. But it would be years before they needed a name for their brand of spirits. McLaughlin left the Navy in 2011 and transitioned to the life of a student, earning an MBA from the University of Virginia and eventually joining the world of finance. Watkins served for 11 years on active duty and nine more in the reserves. As a reservist, he first went to work as an engineer.

While their transition to civilian life went smoothly for the most part, something was missing.

“I wanted to give it a full two years just to commit myself to doing it,” McLaughlin says. “I felt that two years was the required time to give it a fair shake and get my employer a fair effort. But from day one, I knew it wasn't for me. I had the edge to have my own business.”

McLaughlin believes the military mindset allows veterans to get out of the military and enter a new world with confidence; that what might seem unattainable to most doesn’t seem so insurmountable after starting one's adult life overcoming the kinds of hurdles military life can put in one’s way.

“You have to redefine yourself one more time and become a part of a new community with a new skill set,” Watkins adds. “The same is true for getting into whiskey.”

While attending a distilling conference in Seattle, McLaughlin met Bob Stillnovich, an Army veteran who served as an infantry officer in Vietnam. Stillnovich was operating his own distillery in Washington state at the time, one he co-founded with his neighbor, a Navy veteran, and ran with the help of a friend. For them, it was a post-retirement hobby turned business. But they were in their 70s, and it was becoming too much for the trio. They were looking to pass the torch.

McLaughlin and Watkins went to Washington for another kind of basic training -- to learn to make Stillnovich’s “amazing” single-malt American whiskey.

“Bob had been self-taught, and the other guys had been doing it for a little bit longer,” McLaughlin says. “One of them was an engineer, and it was like a graduate-level course on distillation. We took back that education to Baltimore with us, and we finally got up and running.”

McLaughlin’s business background got the business end of Old Line Spirits up and running while Watkins’ engineering skills built the urban distillery.

“The military is good for giving you the confidence to do new things,” Watkins says. “Because you're just given a task and expected to perform it competently. Sometimes you’re trained for it; sometimes you aren’t. We had complementary skill sets, but with our military background, it never crossed our mind that we wouldn't be able to start something like this up and get it right out.”

It took McLaughlin and Watkins two years from their first step in starting the business to put out a finished product in 2017.

Today, Old Line Spirits offers six different whiskeys and three types of rum, all of which they say are of the highest quality. The two are especially proud of their American single malt, for which they took a master class in distilling from their Vietnam veteran friend.

“We really put our heart and soul behind our American single malt,” Watkins says. “Single malt whiskey is historically the realm of the Scots. We make a rich, very flavorful, non-peated whiskey from the same grain. We're taking this category that the Scots have done an amazing job with and do what Americans do, which is innovate and make it our own.”

McLaughlin and Watkins have three key pieces of advice for any veteran looking to venture out on their own. The first is to find someone they trust who has started their own business before and take advice from them. The second is to assess their strengths and weaknesses and figure out how to bridge the gaps in those strengths. Finally, they say it’s all about the drive to get the work done.

“It's easy to look at people who've started a business and think that they know something you don't,” McLauhglin says. “But there's nothing inherently different about me and Arch. We had the drive to do it, and we took the risk.”

-This news has been sourced from https://www.military.com/veteran-jobs/two-veterans-pour-combined-skill-sets-old-line-spirits.html