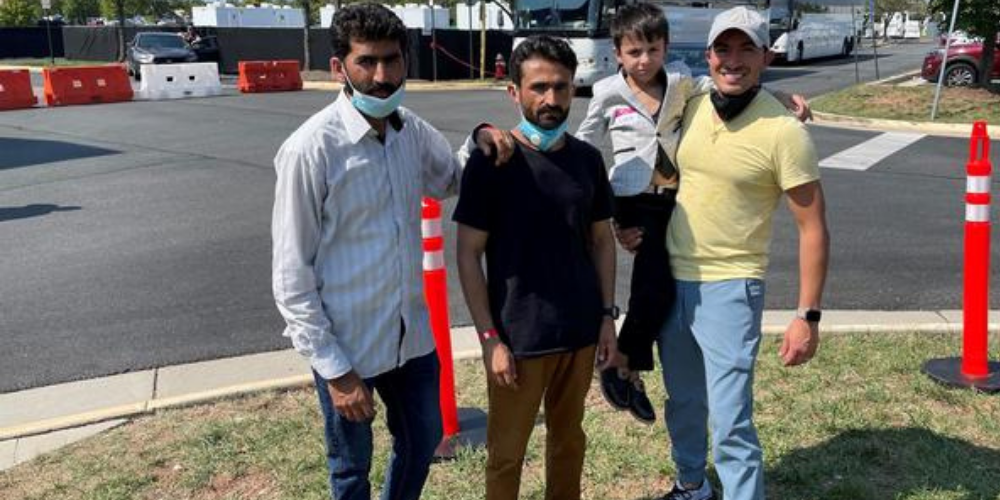 The past week has been filled with stories and images of Afghan allies -- interpreters and support staff who helped American forces during two decades of war -- desperately seeking a way out, climbing through waste-water canals while trying to make it to Hamid Karzai International Airport, and hiding from checkpoints as the Taliban reclaimed Afghanistan.

But for Joshua Rodriguez, who spent weeks working to help a man he'd served shoulder to shoulder with during tenacious fighting more than a decade ago, that story of evacuation culminated at air conditioned airport terminal in the Washington D.C. suburbs on Friday afternoon hoping to celebrate with one of the lucky ones who escaped.

Rodriguez, a former active-duty Army officer living in Seattle, found himself in the ticketing lobby of Dulles International Airport because he was one of many current and former military members who are working tirelessly to get their former Afghan colleagues to safety in the U.S ahead of the Aug. 31 withdrawal of U.S. troops.

When Rodriguez heard that his former interpreter from a 2008 deployment to the Konar province, now a commander of an elite, U.S.-trained Afghan paramilitary unit, was not only getting out of the country but traveling through Dulles, he flew out to try and reunite with him.

"All I had was a text message from the flight attendant through his phone," he explained, while waiting as a steady stream of Afghan refugees filed through the airport. "They wrote down 'Washington IAD' on a napkin with a flight number and arrival time."

Rodriguez calls his friend Iqbal but his full name is Lt. Col. Mohammad Iqbal Nuristani. According to reporting from the Washington Post, he headed up Unit 03 -- part of Afghanistan's intelligence service. He and his men had been fighting the Taliban in downtown Kandahar just this week, the Post reported.

To hear Rodriguez tell it, Iqbal is a clever man who was born in the mountains of northeastern Afghanistan in an area so remote it didn't have birth certificates. "Yet somehow [he was able to] teach himself English within the first 12 months of Americans coming," Rodriguez said.

Once his family evacuated from Kabul, Iqbal was supposed to head to Germany, but a change in plans brought him to Virginia instead. The stopover is designed to be a one of many waypoints for him, and thousands of other refugees, as they go through screenings and checks to make sure they are eligible to enter the United States. By one estimate 18,000 former interpreters, like Iqbal, had been trying to obtain visas to head to the United States for years, a process that was accelerated as Afghanistan began to fall to the Taliban.

It's not clear how many interpreters have been unable to get out but the non-profit organization "No One Left Behind," said they have "recorded over 300 interpreters and their family members killed because of their association with the United States."

Once Rodriguez, who is now a Major in the Army Reserves and a ROTC instructor at the University of Washington, knew that Iqbal would be landing in the United States he immediately booked a flight. He didn't know if he'd be able to see the man -- U.S. officials have denied reporters an opportunity to visit any of the sites where Afghan refugees are staying and have been keeping tight control over access more broadly. But Rodriguez knew he had to try, he had to figure out a way to go see Iqbal, his friend who he'd been trying to help behind the scenes navigate the bureaucratic labyrinth to get a visa.

An overnight flight to another airport further up the east coast, and an hour-long drive brought him to Dulles, about an hour after his friend's flight had landed.

Rodriguez's plan was to try and catch Iqbal as he walked from the screening area, across the terminal to the coach buses waiting for the refugees outside -- amid the rest of the airport traffic in the arrivals area of Terminal 2 near the ticketing line for Saudi and Emirates airlines.

It was a brief window where refugees appear from behind the veil of government flights, buses, and housing. Every 15 minutes or so, a group just in from Afghanistan would leave a screening area and Rodriguez would get up or break from a conversation and scan the lines for his friend.

He hadn't seen the man in years but he had recent pictures of him and he knew one of Iqbal's children would be wearing a distinctive, striped outfit. In between these groups, he would scroll through photos Iqbal had sent him on his phone, both from his time as a military commander and from his journey to America.

Rodriguez was both amused and amazed at the transformation that the man had gone through from a wiry young translator that he knew in 2008 to a bearded and fearsome military commander that had connections to some of the best assets the U.S. military had in Afghanistan.

Yet, despite hours of waiting, Iqbal hadn't arrived. Rodriguez's attempts at getting updates were also more frustrating than helpful. His friend's cell phone had run out of power somewhere along the journey, a common occurrence for those who often left their homes with few personal belongings and had spent days in military facilities with few amenities.

He would frantically sprint downstairs to baggage claim for bathroom breaks, joking that "this would be the moment he comes out."

But by late into the evening, Iqbal still hadn't appeared.

Eventually, Rodriguez learned that Iqbal was being held because his wife and child had to be taken to a local hospital for medical treatment and the government didn't want them to get separated. Momentarily defeated, Rodriguez went to his hotel room to sleep.

It was a short night -- at 5:00 a.m. he was rung awake by a phone call from a State Department official telling him that "if you want to link up with him, there's going to be a very short time" on Saturday at the Dulles Expo Center -- a convention center near the airport.

His opportunity might be seven or eight hours, and then "he goes on to the next place, wherever that is," Rodriguez was told.

Rodriguez threw on some clothes and then dashed to Walmart for a backpack with a wide mouth, an iPhone, and strawberries to join a suitcase full of clothes and supplies that he already had purchased for the family.

At around 10:00 a.m., more than 24 hours after both men got to the Washington D.C. area, Iqbal emerged from the convention center, courtesy of a couple of kind officials looking to help make the reunion happen.

"I broke down like the weak American that I am," Rodriguez said, laughing. Despite the jokes, it was clear that the exchange between the two was complicated by years of war.

"I would be crying too, but my f--king heart turned to stone after this last decade," Iqbal told him.

"Dude, I'm so sorry, man. I've been living the easy life for the last 12 years and you've been f---king constantly fighting," Rodriguez replied.

"Hey, I'm ready for the easy life too," Iqbal replied.

Rodriguez said his old friend looked tired and a little weak but relieved. "This was a boost of energy for him - he was totally in a good mood," he added.

Rodriguez wasn't alone in trying to help Iqbal. "We had tons of enablers," he explained and noted that there were about seven former and current Army battalion commanders who were using their influence to remove roadblocks for the one-time translator. Together, they wrote letters of recommendation and leaned on officials at a range of agencies to speed his application along.

The road ahead for Iqbal will be a challenge. Getting to the U.S., while an achievement, was only part of the struggle. Once here, Afghan refugees like Iqbal are shuttled around to various locations like Fort Pickett in Virginia where they are given more screenings and the process of placing them in more permanent homes continues.

"That's where he gets his final documentation and there's going to be pro bono lawyers that are already positioned to get him the right paperwork, because he has nothing right now," Rodriguez explained.

This news has been sourced from https://www.military.com/daily-news/2021/08/28/waiting-america-end-of-army-officers-odyssey-help-evacuate-afghan-ally.html