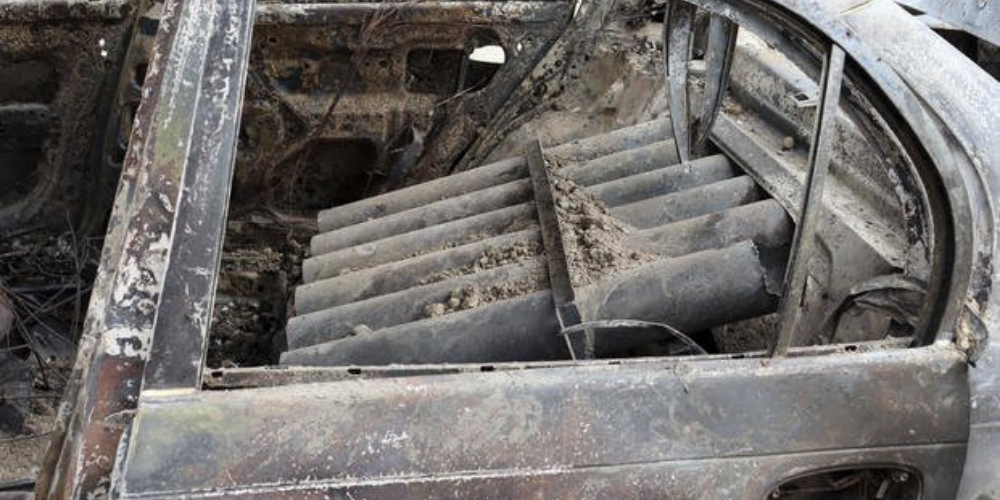 Amira Jadoon is an assistant professor at the Combating Terrorism Center at the United States Military Academy at West Point. Andrew Mines is a research fellow at the Program on Extremism at George Washington University. They have been tracking ISIS-K for years and answered our questions about who the terrorist group is and the threat it poses in a destabilized Afghanistan.

An attack on a crowd gathered outside Kabul’s airport on Aug. 26, 2021, has left at least 100 people dead, including at least 13 U.S. troops. ISIS-K claimed responsibility for the coordinated suicide bomb and gun assault, which came just days after President Joe Biden warned that the group -- an affiliate of the Islamic State group operating in Afghanistan -- was “seeking to target the airport and attack U.S. and allied forces and innocent civilians.”

The Islamic State Khorasan Province, which is also known by the acronyms ISIS-K, ISKP and ISK, is the official affiliate of the Islamic State movement operating in Afghanistan, as recognized by Islamic State core leadership in Iraq and Syria.

ISIS-K was officially founded in January 2015. Within a short period of time, it managed to consolidate territorial control in several rural districts in north and northeast Afghanistan, and launched a lethal campaign across Afghanistan and Pakistan. Within its first three years, ISIS-K launched attacks against minority groups, public areas and institutions, and government targets in major cities across Afghanistan and Pakistan.

By 2018, it had become one of the top four deadliest terrorist organizations in the world, according to the Institute for Economics and Peace’s Global Terrorism Index.

But after suffering major territorial, leadership and rank-and-file losses to the U.S.-led coalition and its Afghan partners – which culminated in the surrender of over 1,400 of its fighters and their families to the Afghan government in late 2019 and early 2020 – the organization was declared, by some, to be defeated.

Can you tell us a little more about the group’s background?

ISIS-K was founded by former members of the Pakistani Taliban, Afghan Taliban and the Islamic Movement of Uzbekistan. Over time, though, the group has poached militants from various other groups.

One of the group’s greatest strengths is its ability to leverage the local expertise of these fighters and commanders. ISIS-K first started to consolidate territory in the southern districts of Nangarhar province, which sits on Afghanistan’s northeast border with Pakistan and is the site of al-Qaida’s former stronghold in the Tora Bora area.

ISIS-K used its position on the border to garner supplies and recruits from Pakistan’s tribal areas, as well as the expertise of other local groups with which it forged operational alliances.

Substantial evidence shows that the group has received money, advice, and training from the Islamic State group’s core organizational body in Iraq and Syria. Some experts have placed those figures in excess of US$100 million.

What are its aims and tactics?

ISIS-K’s general strategy is to establish a beachhead for the Islamic State movement to expand its so-called caliphate to Central and South Asia.

It aims to cement itself as the foremost jihadist organization in the region, in part by seizing the legacy of jihadist groups that came before it. This is evident in the group’s messaging, which appeals to veteran jihadist fighters as well as younger populations in urban areas.

Like the group’s namesake in Iraq and Syria, ISIS-K leverages the expertise of its personnel and operational alliances with other groups to carry out devastating attacks. These attacks target minorities like Afghanistan’s Hazara and Sikh populations, as well as journalists, aid workers, security personnel and government infrastructure.

ISIS-K’s goal is to create chaos and uncertainty in a bid to push disillusioned fighters from other groups into their ranks, and to cast doubt on any ruling government’s ability to provide security for the population.

What relationship does ISIS-K have with the Taliban?

Since its inception, ISIS-K has tried to recruit Afghan Taliban members while also targeting Taliban positions throughout the country.

ISIS-K’s efforts have met with some success, but the Taliban have managed to stem the group’s challenges by pursuing attacks and operations against ISIS-K personnel and positions.

These clashes have often occurred in tandem with U.S. and Afghan air power and ground operations against ISIS-K, although the full extent to which these operations were coordinated is still unclear.

What is clear is that the majority of ISIS-K’s manpower and leadership losses were the result of U.S. and Afghan-led operations, and American air strikes in particular.

How much of a threat is ISIS-K in Afghanistan and to the international community?

As a relatively weakened organization, ISIS-K’s immediate goals are to replenish its ranks and signal its resolve through high-profile attacks. Doing so can help ensure that the group doesn’t become an irrelevant player in the Afghanistan-Pakistan landscape. It is interested in attacking U.S. and allied partners abroad, but the extent to which the group is able to inspire and direct attacks against the West is an issue that has divided the U.S. military and intelligence community.

In Afghanistan, however, ISIS-K has proved itself to be a much greater threat. In addition to its attacks against Afghan minorities and civilian institutions, the group has targeted international aid workers, land-mine removal efforts and even tried to assassinate the top U.S. envoy to Kabul in January 2021.

It is still too early to tell how the U.S. withdrawal from Afghanistan will benefit ISIS-K, but the attack on the Kabul airport shows the continued threat posed by the group.

In the short term, ISIS-K will likely continue its efforts to sow panic and chaos, disrupt the withdrawal process and demonstrate that the Afghan Taliban are incapable of providing security to the population.

If the group is able to reconstitute some level of territorial control in the longer term and recruit more fighters, it will most likely be poised to make a comeback and pose threats on the national, regional and international levels.

This news has been sourced from https://www.military.com/daily-news/opinions/2021/08/30/what-isis-k-two-terrorism-experts-group-behind-deadly-kabul-airport-attack-and-its-rivalry-taliban.html