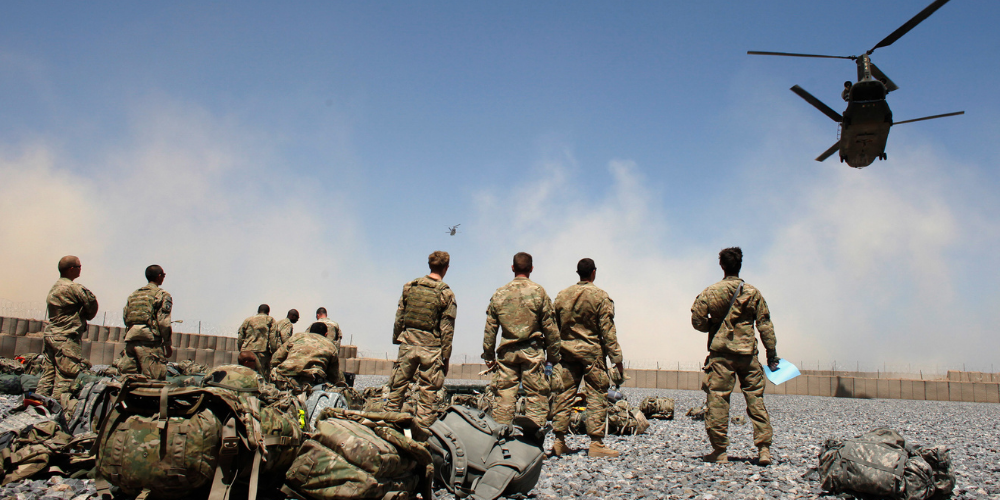 The United States' longest war is coming to an abrupt end.

US troops are leaving Kabul with the Taliban once again in charge of the capital of Afghanistan, which American soldiers captured nearly 20 years ago.

The rapid collapse of the Afghan government after 20 years of US support shows the limits of Washington's military power, several experts have said, boosting arguments against US foreign interventions and "endless wars".

However, President Joe Biden's critics say the scenes of desperate Afghans attempting to flee Kabul is a sign of US weakness and proof of the necessity for global American military engagement.

As much of the world's focus rightly remains on efforts to get Afghans to safety outside the country, the Taliban's victory is spurring a heated debate in Washington about the US's role in the world.

"A military-led project of state-building and nation-building is always going to be doomed to failure," said Annelle Sheline, a research fellow at the Quincy Institute for Responsible Statecraft, a think-tank that advocates against interventionist policies.

Anxiety over abuses under Taliban rule, including women's rights and the safety of Afghans who worked with the US, was on display in the chaos at Hamid Karzai International Airport. Footage of people flooding the tarmac and hanging on to departing airplanes showed a glimpse of Afghans' fear of life under the Taliban.

Meanwhile, the Taliban's assurances that it would not seek revenge against its foes have not mitigated the growing concerns over Afghan suffering amid reports of rampant abuses already being carried out.

Biden has acknowledged the threat to human rights in Afghanistan while arguing that Washington could do nothing to fight off the Taliban except sending thousands of more troops to fight and possibly die in the country.

"Does anybody truly believe that I would not have had to put in significantly more American forces – send your sons, your daughters … to maybe die," he said on Friday. "And for what?"

Jawied Nawabi, an Afghan American assistant professor in sociology and economics at the City University of New York – Bronx Community College, said he hopes that the US draws a lesson from Afghanistan to become less reliant on military power.

"There is a saying that if your only tool is a hammer, everything looks like a nail, and they just keep doing the same thing," Nawabi told Al Jazeera of the US military interventions.

"I just hope … people start resisting the military approach, the hammer and the nail approach."

Despite what has been widely characterized as a military defeat for the US in Afghanistan, many hawkish voices in Washington are arguing that the issue was a lack of constant force behind the hammer of military power.

"This Trump-Biden withdrawal is a big mistake," former US official John Bolton, who served under George W Bush and Donald Trump, wrote on Twitter on Thursday.

"Beijing and Moscow, they are laughing. Tehran and Pyongyang have seen that the Administration is credulous when it comes to claims by devoted adversaries of the United States. It makes us look like we're suckers."

For his part, former Secretary of State Mike Pompeo, who helped negotiate the withdrawal deal with the Taliban last year, said the current Administration should have used force as a deterrent against Taliban fighters, including the threat of coming after their "friends and family".

"The Taliban are aggressive, and they are fearless because we have an administration that has refused to adopt a deterrence model, the one that President Trump and I had," Pompeo told Fox News last week.

Nawabi said the blunt force approach was the main problem with Washington's relations with Afghanistan, arguing that the US needs more "soft power" in its foreign policy via aid and development programs.

The US spent more than $2 trillion on the war. Still, Nawabi raised questions over how much of that money went to aid Afghans versus the money spent on the Pentagon and military contractors, noting the staggering poverty and drug abuse rates in Afghan society.

Asked if he was surprised by the swift Taliban takeover, Nawabi told Al Jazeera it did not matter how long it took the Afghan government to crumble if the collapse was inevitable.

"Why is it that after 20 years, you built a hollow state that would collapse even in six months, if not 11 days? Why would that question even arise if you had built a real capacity and military system?"

Sheline, of the Quincy Institute, echoed Nawabi's remarks on resources dedicated to Afghanistan being spent on the Pentagon and military contractors, invoking former President Dwight Eisenhower's 1961 warnings about the "unwarranted influence" of the military-industrial complex.

She said weapon manufacturers and war profiteers are the ones who want "the forever wars to continue".

"The nation-building project in Afghanistan was always going to fail because you cannot impose democracy or impose a system of government on another people and expect it to have legitimacy," Sheline told Al Jazeera.

The view that the US should not police the world or engage in nation-building is a popular one among voters, Sheline added.

Their actual policies aside, the last three US presidents were elected on platforms of less, not more, military interventions. Barack Obama pledged to end the Iraq War in his 2008 campaign. Biden and Trump used the term "forever wars", promising to end them.

Sahar Khan, a research fellow at the Cato Institute, said while the US army remains the largest and most powerful globally, Washington is "too reliant" on military force.

"The main lesson, which I hope resonates, is a deeper understanding of the limitations of the US military," Khan told Al Jazeera.

She said past experiences in Vietnam, Iraq, and Afghanistan have shown that the military cannot accomplish "civilian-centered missions" adequately.

Critics of the withdrawal have warned that it may compromise Washington's credibility in the world as well as its commitment to its allies.

But Khan said the US earns its global credibility from its domestic realities, not its foreign policy.

"The power of the United States is the fact that it is still very much a land of opportunity," she said. "And I think that narrative eventually does end up coming to the top."

The argument resonates with legislators in both parties, calling for investing resources spent on the "forever wars" at home.

Scott Cooper, a nonresident senior fellow at the Atlantic Council and a US military veteran who served in Iraq and Afghanistan, said he does not like the term "forever wars" because of its isolationist connotations, stressing that Washington should remain engaged in the world.

Still, he voiced support for efforts to curb executive power to engage in war, including the push to repeal authorizations for the use of force (AUMFs) granted by lawmakers to then-President George W Bush after the 9/11 attacks.

"I don't think that this is an America-first or isolationist idea," Cooper told Al Jazeera. "What we need to have, and what is important and responsible, is that the first branch of government in the United States, the legislative branch, needs to do its job."

The US Constitution gives Congress solely the right to declare war, but World War II was the last time legislators did so formally.

A Taliban fighter in the city of Ghazni, south of Kabul, August 14.

Cooper said the rapid Taliban takeover of Afghanistan was always a real possibility, if not entirely predictable. "I'm brokenhearted," he said. "We worked so hard there, especially those of us that were in the military."

As for the lessons to be learned from the war, Cooper said there are unintended consequences to interventions. "The military option is frequently the most fraught and difficult and probably not the right option if there are not other things that are involved such as a diplomatic option," he said.

Cooper added that while the US could supply and train the Afghan military, it could not ensure or fully measure two vital factors – morale and loyalty.