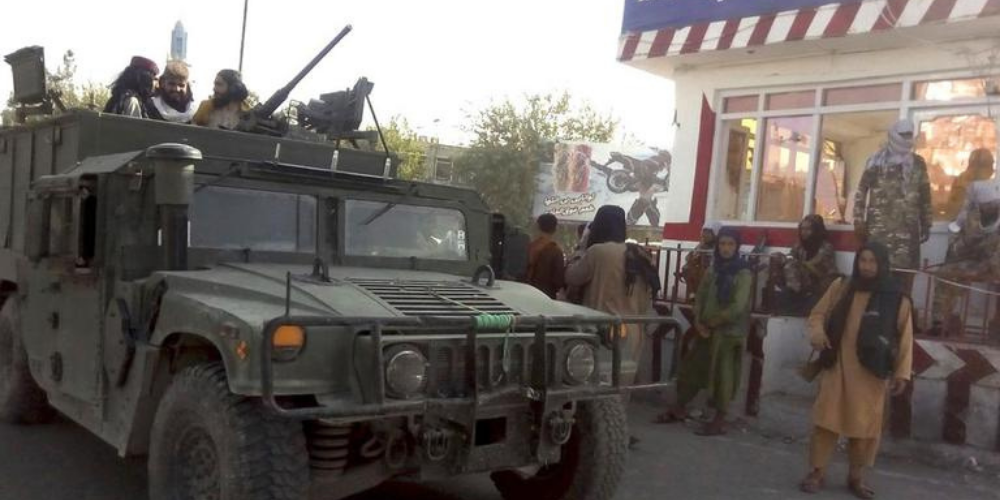 The Afghanistan government is collapsing even faster than US military leaders thought possible just a few months ago when President Joe Biden ordered a full withdrawal.

The Taliban seized the strategic Afghan city of Ghazni Thursday, just 150 kilometers from Kabul, in one of the insurgents' most important gains in a lightning offensive that has seen them seize ten provincial capitals in a week.

The interior ministry confirmed the city's fall, which lies along the major Kabul-Kandahar highway and effectively serves as a gateway between the capital and militant strongholds in the south. "The enemy took control," spokesman Mirwais Stanikzai said in a message to media, adding fighting and resistance were still going on.

The government has now effectively lost most of northern and western Afghanistan and now holds a scattered archipelago of contested cities also dangerously at risk of falling to the Taliban.

What does the latest US intelligence assessment say?

The most recent American military assessment, taking into account the Taliban's latest gains, says Kabul could be under insurgent pressure by September and that the country could fall entirely to Taliban control within a couple of months, according to a defense official who discussed the internal analysis Wednesday on condition of anonymity.

The United States continues to support the Afghan military with limited airstrikes, but those have not made a strategic difference thus far and are scheduled to end when the US formally ends its role in the war on 31 August. Biden could continue airstrikes beyond that date, but given his firm stance on ending the war, that seems unlikely, reported AP.

"My suspicion, my strong suspicion, is that the 31 August timeline's going to hold," said Carter Malkasian, who advised US military leaders in Afghanistan and Washington.

The US keeps a distance as Afghan forces face Taliban rout

Senior US military officials had cautioned Biden that a full US withdrawal could lead to a Taliban takeover, but the president decided in April that continuing the war was a waste. He said on Tuesday that his decision holds, even amid talk that the Taliban could soon be within reach of Kabul, threatening the security of the US and other foreign diplomats.

Officials said that there had been no decision or order to evacuate American diplomatic personnel from Afghanistan. But one official said it is now time for serious conversations about whether the US military should begin to move assets into the region to be ready if the State Department calls for a sudden evacuation.

Kirby declined to discuss any evacuation planning, but one congressional official said a recent National Security Council meeting had discussed preliminary planning for a potential evacuation of the US Embassy but came to no conclusions.

Any such plan would involve identifying US troops, aircraft and other assets to operate from within Afghanistan or nearby areas. The US already has warships in the region, including the USS Ronald Reagan aircraft carrier and the USS Iwo Jima amphibious ready group with the 24th Marine Expeditionary Unit aboard.

Military commanders have long warned that it would be a significant challenge for the Afghan military to hold off the Taliban through the end of the year. Shortly after Biden announced his withdrawal decision in early May, General Mark Milley, chairman of the Joint Chiefs of Staff, said he foresaw "some dramatic, possible bad outcomes" in a worst-case scenario. He held out hope that the government would unify and hold off the Taliban and said the outcome could clarify by the end of the summer.

While the capital of Kabul itself has not been directly threatened in advance, the stunning speed of the offensive raises questions of how long the Afghan government can maintain control of the slivers of the country it has left. The government may eventually be forced to pull back to defend the capital, and just a few other cities as thousands displaced by the fighting fled to Kabul and now live in open fields and parks.

Military officials watching the deteriorating situation said that the Taliban hadn't taken steps to threaten Kabul so far. But it isn't clear if the Taliban will wait until it has gained control of the country's bulk before attempting to seize the capital.

The loss of the Ghazni will likely pile more pressure on the country's already overstretched airforce, needed to bolster Afghanistan's dispersed security forces, who have increasingly been cut off from reinforcements by road.

In less than a week, the insurgents have seized ten provincial capitals and have encircled the biggest city in the north, the traditional anti-Taliban bastion of Mazar-i-Sharif.

Fighting was also raging in Kandahar and Lashkar Gar — pro-Taliban heartlands in the south and Herat in the west.

Late Wednesday, the Taliban said they had overrun the heavily fortified jail in Kandahar, saying "hundreds of prisoners were released and taken to safety".

The Taliban frequently target prisons to release incarcerated fighters and replenish their ranks. The loss of the prison is a further ominous sign for the country's second city, which has been besieged for weeks by the Taliban.

Kandahar was once the stronghold of the Taliban — whose forces coalesced in the eponymously named province in the early 1990s — and its capture would serve as both a tactical and psychological victory for the militants.