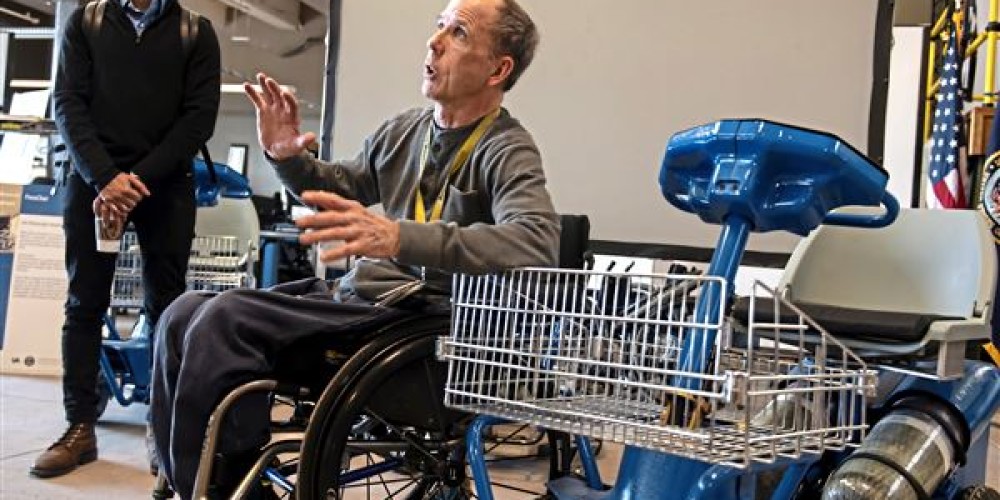 Rory A. Cooper, a disabled Army veteran, has spent most of his adult life trying to make life easier for people with disabilities.

To fulfill that mission, he proposed and created the University of Pittsburgh's Human Engineering Research Laboratories, which he has headed since 1994. He oversees about 25 researchers and another 75 student interns, undergraduate and graduate students who have made groundbreaking improvements in wheelchairs, developed prosthetics and robotic limbs, and created assistance devices to make computers accessible.

The next challenge: developing an autonomous vehicle that will increase mobility for people with disabilities. The program recently received a $750,000 grant from the Paralyzed Veterans of America to begin developing a prototype vehicle, which piggybacks nicely with the $1 million federal Department of Transportation grant it received in 2020 to examine whether people with disabilities would benefit from an autonomous vehicle.

During a tour of the $20 million facility at Bakery Square this week, Mr. Cooper said researchers are looking to design an autonomous vehicle that is easily accessible for people who use wheelchairs. He provided the tour for Diana Furchtgott-Roth, an economics professor at George Washington University who was deputy assistant secretary for research and technology at the DOT when the grant was awarded.

“We have to first get an idea of the problem,” Mr. Cooper said. “Then we can design the solution.”

Mr. Cooper cited research from the Centers for Disease Control and Prevention that shows 57 million Americans have some type of disability and 6 million of them have transportation needs. Researchers at HERL have found that 70.6% of those with transportation needs limit their travel as a result; 55.7% have to ask for rides; and 48.7% would be interested in self-driving vehicles if they were available.

Because many of those with disabilities use wheelchairs, Mr. Cooper said, providing rides isn’t easy because many vehicles aren’t wheelchair accessible, users can’t easily transfer from chairs to vehicles and chairs often are too heavy for drivers to pick up and store during the ride.

That’s why researchers will try to develop an autonomous vehicle that can easily accommodate passengers in their wheelchairs. Although fully autonomous vehicles without drivers are years away, the expectation is that when they are developed and approved they could transport people with disabilities as passengers who wouldn’t need a license to drive.

Mr. Cooper, who uses a wheelchair after his bicycle was struck by a vehicle while he was a 20-year-old sergeant in Germany, said accessible autonomous vehicles would “open up more opportunities” for people with disabilities to travel, especially elderly people.

“Our goal is for you to buy a new [autonomous] vehicle and have it retrofitted to accommodate wheelchairs,” said Mr. Cooper. “Hopefully, the retrofit is something we can do for $10,000 or less.”

After reviewing programs at HERL that have developed new electric wheelchairs that reduced their weight from 400 pounds to 250 pounds and created chairs that run on compressed air rather than electricity that weigh about 80 pounds, Ms. Furchtgott-Roth said she’s looking forward to what the facility can do with autonomous vehicles.

“This is advancing the needs of people who want to travel,” she said. “Some of these people have disposable income, but they haven’t been able to take advantage of it.”

A lot of HERL’s work involves research to benefit people with disabilities, but it is much more than a place that develops theories.

In addition to work space to test wheelchairs and work with clients on the fourth floor at Bakery Square, HERL has a full-blown machine shop in the basement where it can design, cut, and mill metal pieces for the advances proposed by researchers. It includes three 3D printers, a welding shop and the country’s only kirigami engineering processing machine, a new Japanese technology that allows metal to be folded in the same manner that artists fold paper in origami.

The machine shop makes all of the parts for wheel chairs, prosthetics and other devices. Researchers have also developed devices to simulate heart surgery, special computer mouses — both right-handed and left-handed — for people who don’t have use of their hands, and robotic hospital-style beds that make it easier for people with disabilities to transfer between a wheelchair and bed.

By request, the shop even produced a miniature model of a wheelchair for the holiday train display at the VA hospital in Oakland.

On Tuesday, Carnegie Mellon University graduate Breelyn Styler of Regent Square was working with a computer and robotic arm as she prepared for a research study to begin this week.

Ms. Styler will work with people who have limited use of their arms to study whether a robotic arm would help them accomplish kitchen tasks such as making coffee, pouring cereal and opening cabinets. If so, what type of control would be best: a touch-screen computer, a joystick or breathing through a straw?

“The hope is we can generalize [the robotic arm and its controls],” Ms. Styler said. “Making everything automated isn’t what everyone wants because it can take away their independence.”

After the accident that left him unable to use his legs, Mr. Cooper decided to go to college to study engineering and enrolled at California Polytechnic State University in San Luis Obispo.

Simply graduating was a difficult task in the early 1980s, before the Americans with Disabilities Act required full accommodations for people with disabilities, Mr. Cooper said. At that time, his primary goal was “to get a job.”

His first job, at the Diablo Canyon Power Plant, changed the course of his career. He started there as a student engineer and then joined the staff, where one of his duties was to teach basic electric circuitry to plant operators.

Mr. Cooper found he enjoyed teaching and his supervisors encouraged him to go to graduate school. He eventually got his doctorate in electrical and computer engineering from the University of California, Santa Barbara. That’s where he says he got “lucky” and was exposed to medical and human engineering.

Along the way, Mr. Cooper trained as an athlete for the Paralympics, where he won numerous gold medals in track and field. He won races using a special wheelchair he designed himself.

He was teaching at California State University, Sacramento, when he sold Pitt and the VA on HERL. Initially, he also taught in the classroom and rose to become chairman of the Rehabilitation Science and Technology Department. While he enjoyed working with the students in the classroom, he found that he enjoyed working with them more in the lab, which is where he spends almost all of his time now.

Mr. Cooper, now 62, said he has had an interest in disabled vets since he received help after his accident. From 2004 through 2011, he volunteered regularly at Walter Reed Army Medical Center in Bethesda, Md., to help injured veterans returning from the war in Afghanistan “learn to live full and productive lives.”

“The most rewarding things are the smiles and happy tears on our veterans’ faces when you can do something to make a difference in their lives,” he said. “So that’s what I’ve committed myself to do.”

Mr. Cooper said he considers it an honor that Paralyzed Veterans of America have chosen his program to develop an autonomous vehicle.

“Those are my peer veterans. They have faith in us and it’s a special responsibility for us to try to deliver.”