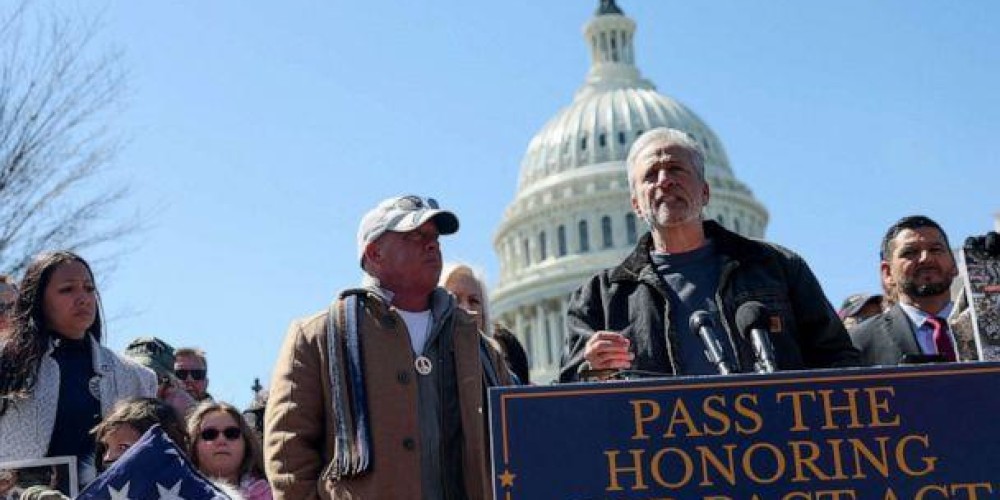 Chuck Schumer has vowed to file a long-awaited bill that would provide health benefits to US troops who have been exposed to toxic fumes from "burn pits" in Iraq and Afghanistan.

Outside the United States Capitol with comedian Jon Stewart and half a dozen families of victims of such toxic exposure, Senator Schumer provided a guarantee that the US government will provide medical treatment to sick veterans.

Until now, we've refused to deal with one of the costs of those wars, the healthcare needs of the vets who fought and sacrificed for us, said Schumer.

The burn pits consisted of large holes dug in the ground, some as large as a football pitch, where all kinds of garbage and waste from nearby US military bases were dumped and burned, and sometimes jet fuel was added.

As many as 2.5 million US veterans were possibly exposed to burn bits during the wars that started in Iraq and Afghanistan in 2001 and 2003, respectively.

Under the "Honor Our PACT Act," the US Veterans Administration reforms procedures to presumptively grant veterans who were in Iraq and Afghanistan and are now suffering from cancer, respiratory diseases, or cardiac problems medical benefits.

A vote in the US Senate is needed for it to pass, where Democrats hold a slim 51-vote majority with Vice President Kamala Harris serving as a tie-breaker.

Senate Republican leader Marco Rubio has backed the bill and Schumer appeared confident on Tuesday that he has the votes necessary.

With 34 Republican votes of support, the bill was approved by a 256-174 vote in the US House of Representatives on March 3.

Senator Biden called for the passage of the legislation in his State of the Union address on March 1.

The government shouldn't wait to provide services to vets in need, according to Biden, even though it's not certain that burn pit toxins caused his son's cancer or those of many others.

It is reminiscent of the "Agent Orange" illness, which plagued veterans of the Vietnam War who were exposed to highly toxic defoliants sprayed over the country's jungles during the 1960s and early 1970s.

The Vietnamese government said in 2007 that up to three million Vietnamese suffered from birth defects after Agent Orange.