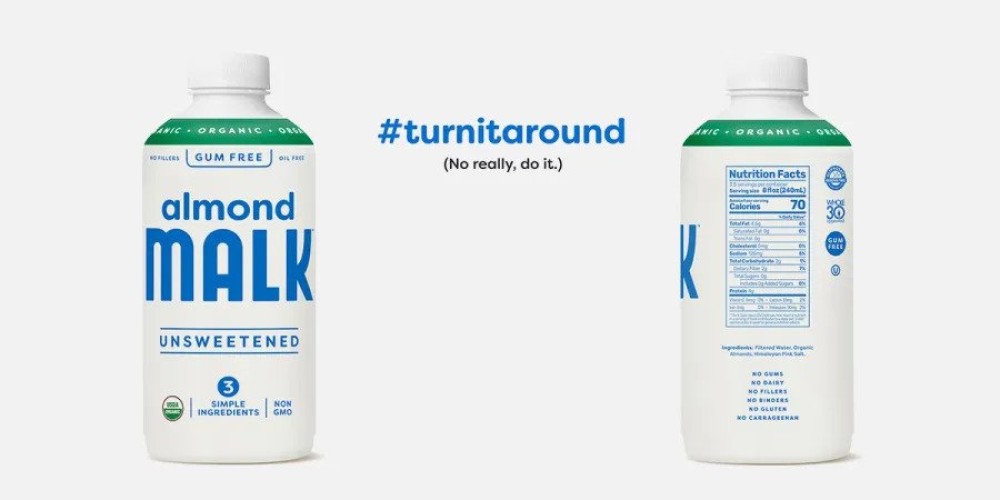 In this marketing roundup, Sparkling Ice honors America’s veterans through its third annual Cheers to Heroes campaign, plant-based beverage maker MALK encourages consumers to take their bottle and #turnitaround and SodaStream partners with David Hasselhoff to save the baby sea turtles. Plus, the founders of Finnish Long Drink try to help America become the happiest place on earth.

In celebration of Earth Month this April, SodaStream has launched a campaign in partnership with SEE Turtles, an NGO committed to saving sea turtles around the globe. Through the initiative, SodaStream has committed to saving one baby sea turtle for every water maker sold worldwide during April, according to a press release. The funds will go toward community-based conservation programs at more than 20 nesting beaches in 16 countries to save 1 million baby sea turtles in total. For more information, visit sodastream.com.

Plant-based dairy brand MALK’s newest campaign encourages consumers to take their bottle and #turnitaround to draw attention to the product’s nutrition label and ingredients. The brand hopes to showcase the backside of its packaging as its “best side,” illuminating MALK’s clean labels that point out its products are free of dairy, gums, fillers, oils and carrigeen. For more information, visit malkorganics.com.

Sparkling Ice has announced the launch of its third annual Cheers to Heroes campaign honoring America’s veterans. From April 1 to July 31, consumers will be able to upload their purchase receipts to the Sparkling Ice site and use the reward program to make donations toward Honor Flight Network. Additionally, the brand has added two new SKUs to its lineup: Berry Lemonade and +Caffeine Watermelon Lemonade. During the campaign, the new offerings will have limited-edition packaging that displays the logos for Honor Flight Heroes and Homes for Our troops. For more information, visit sparklingice.com.

After Finland was recently named the happiest country in the world for the fifth consecutive year, the founders of Finnish Long Drink were inspired to launch the brand’s first national ad campaign to (virtually) transport Americans there. The multifaceted campaign launched on April 4 with an onslaught of video content that “captures the spirit of Finland and the joy of experiencing a refreshing, delicious long drink,” according to a press release. The Finnish Long Drink campaign is streaming across TV and online platforms, including YouTube and social media. For more information, visit thelongdrink.com.

CBD-infused beverage brand Mad Tasty has teamed up with Camp Lucky for the launch of its first video campaign, “Tasty Fruit.” The short video contains an in-your-face and “in-your-mouth” parody of ads and yore that emphasizes Mad Tasty’s goal of “being part of people’s fun, busy, and creative lives.” Additionally, the brand has partnered with Boulder Media House to heighten the campaign by turning the video content into clickable, shoppable experiences. For more information, visit madtasty.com.

Thirty-six PepsiCo drivers, all military veterans, will take an American flag first flown in combat on a 10,000-mile, 53-stop relay across the country as part of the brand’s seventh annual “Rolling Remembrance” campaign. The campaign is led in partnership with PepsiCo Valor and helps raise funds for the Children of Fallen Patriots Foundation, an organization that provides college scholarships and educational counseling to children who have lost a parent in the line of duty. The veterans will hand off the flag to one another at relay points from Seattle to New York, and the 53-stop relay journey will conclude at PepsiCo’s headquarters in Purchase, New York ahead of Memorial Day. For more information, visit pepsico.com.