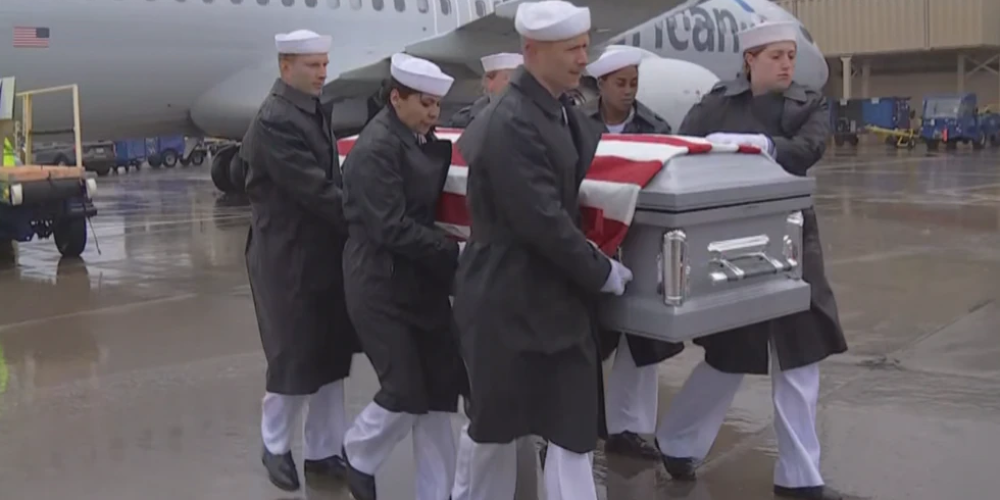 Marine First Class Wilbur F. Newton was buried in his hometown in Missouri, 81 years after being killed in Pearl Harbor.

When Newton's remains, identified through DNA testing, arrived at Kansas City International Airport on Tuesday to a Navy guard and a water salute from two fire engines, his family members were relieved and finally rested.

"It's an emotional time for the family," said Jane Perkins, Newton's first cousin's daughter. "We've always hoped, but no one knew until today."

According to his obituary, Newton perished in the attack on Pearl Harbor on Dec. 7, 1941, while stationed aboard the USS Oklahoma. Since 1941, his remains had been interred in Hawaii with the remains of other unidentified service members.

After his maternal first cousin and her two sons supplied the Navy DNA samples in 2012, the Defense POW/MIA Accounting Agency used dental and anthropological analyses to identify Newton. On Oct. 21, 2021, approximately 80 years after his death, Newton was found.

According to his obituary, Newton was killed in the Pearl Harbor attack while riding aboard the USS Oklahoma. His remains had been interred in Hawaii with other unidentified veterans since 1941.

The Defense POW/MIA Accounting Agency used dental and anthropological tests to identify Newton after his maternal first cousin and two sons provided Navy DNA samples in 2012. Newton was discovered on Oct. 21, 2021, over 80 years after his death.

In recognition of his service, Newton was awarded the American Defense Service Medal, the Purple Heart, and the Gold Star pin.

On May 28, a memorial service for Newton will be held at 10 AM in Mound City's United Methodist Church, followed by a military ceremony at Mount Hope Cemetery. Visitation will occur at Pettijohn & Crawford Funeral Home on May 26 and 27 from 9 AM to 5 PM.