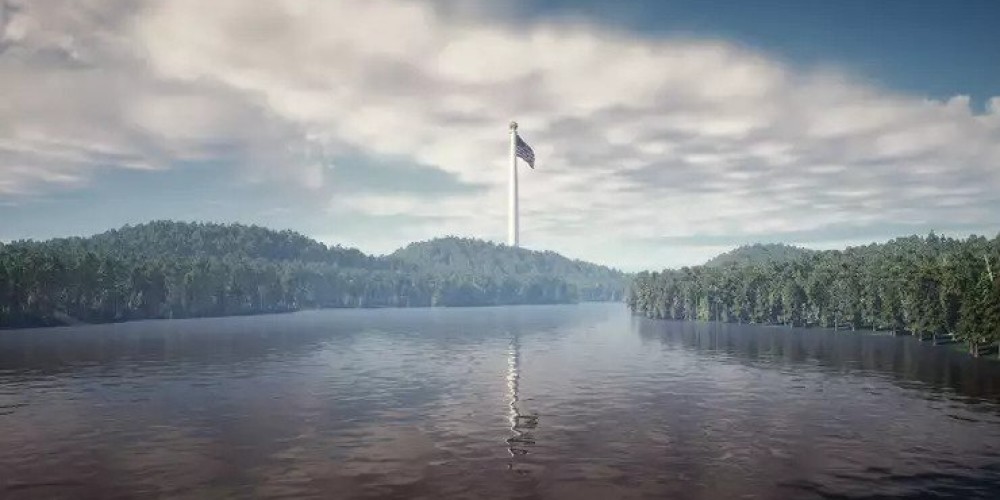 The world’s tallest flagpole could be coming to a rural section of Maine’s DownEast region in time for the 250th anniversary of American independence on July 4, 2026.

Called “Flagpole of Freedom Park,” the project was unveiled by Wreaths Across America founder Morrill Worcester and his sons Mike and Rob at the end of March.

It envisions a centerpiece 1,461 foot tall flagpole meant as “an unprecedented symbol of national pride and freedom,” within the larger 2,500-acre park which intends to become the “only place” nationwide to honor all 24 million deceased veterans and their service to the United States since the Revolutionary War.

Surrounding the flagpole will be “Remembrance Walls” to honor these millions of veterans, as well as “The Village of Old Glory” which plans to be the park’s center of entertainment with hotels, restaurants, shops and museum experiences, according to a fact sheet from Flagpole of Freedom.

The flagpole itself would be more than a pole with the “largest flag ever flown — the equivalent of one and a half football fields” the park said — it plans to be a building featuring two observation decks and multiple floors of museum, convention, theater and retail space.

The flagpole would be taller than the Empire State Building if constructed and that in being built on a 315 foot high hill, the flagpole would rise to a symbolic height of 1,776 feet above sea level, Flagpole of Freedom Park said.

Atop the structure would sit an “Observation Ball” allowing for 360 degree views in a 100 mile radius, the park said.

The project would be a boost to the state and regional economy, with the park saying it will create an estimated 8,000 year-round jobs and that operations are expected to produce $27 million in annual tax revenue.

In a release, the park said that Washington County, where the project would be located, is one of the “most economically challenged” in Maine due to an aging population and a lack of available jobs to attract newer younger residents, which has led to population decline.

The project is estimated to cost $1 billion in its first phase of development the park said, adding that it is apolitical and has been 12 years in the making.

Worcester, who founded Wreaths Across America in 1992, had the vision for the project in his native Columbia Falls, Maine following the success of his earlier program which has grown to having 2.5 million wreaths laid at over 2,900 locations for American veterans across the globe in 2021, the park said.

Currently there are 18 million living veterans in the United States and 1.4 million active-duty members of the armed forces, Flagpole for Freedom Park said.