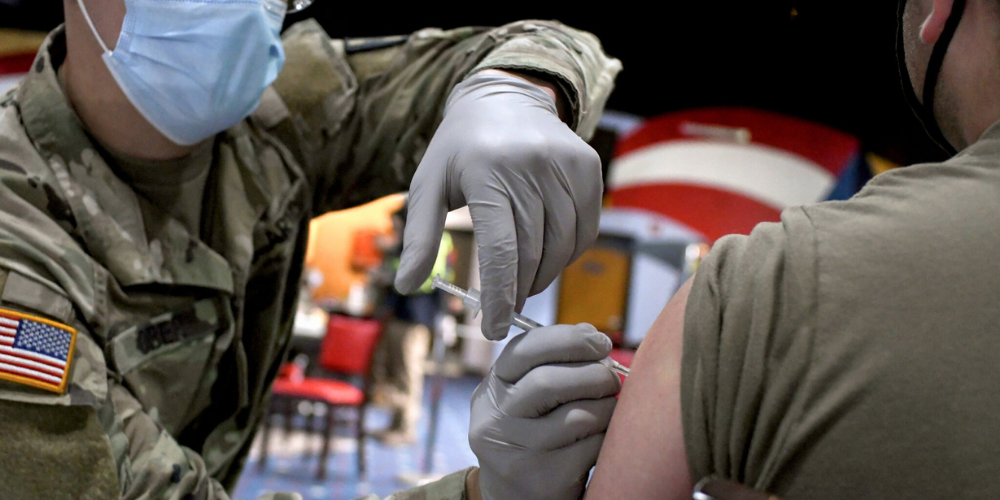 The Defense Department will require U.S. troops to get COVID-19 vaccines starting mid-September or as soon as the Food and Drug Administration approves it -- "whichever comes first," according to a memo released Monday by the Pentagon.

Defense Secretary Lloyd Austin said in the memo to troops that he would not "hesitate to act sooner or recommend a different course to the President if I feel the need to do so" should the need arise with increasing cases attributed to the Delta variant.

"I will seek the President's approval to make the vaccines mandatory no later than mid-September, or immediately upon [approval by the Food and Drug Administration,] whichever comes first," he added.

News of the memo was first reported by The Associated Press.

Austin said the department will spend the next several weeks "preparing for the transition."

Read Next: Senate Confirms Del Toro as Secretary of the Navy

"I have every confidence that Service leadership and your commanders will implement this new vaccination program with professionalism, skill, and compassion. We will have more to say about this as implementation plans are fully developed," he wrote.

The decision comes a week after President Joe Biden told defense officials to develop a plan requiring troops to get vaccinated -- part of his broader campaign to require vaccinations among the federal workforce.

But that was seven months before the highly contagious Delta variant began sweeping across the country, increasing case numbers and upping the likelihood that other, possibly more virulent, mutations could occur, according to Johns Hopkins University medical experts.

Shortly after Austin's memo was released Monday, Biden issued a statement praising the decision, saying the country is on a "wartime footing" against the virus.

"We cannot let up in the fight against COVID-19, especially with the Delta variant spreading rapidly through unvaccinated populations," Biden said.

In a briefing with reporters Monday, Pentagon Press Secretary John Kirby said there's no evidence that vaccine refusal is a widespread problem in the military.

"Members of the military understand when you sign up for the military, that there are requirements laid upon you," he said. "Some of those requirements include being healthy and fit and ready to serve. Some of that depends on our requirement to make sure you're fit and healthy, through inoculation and vaccination."

Kirby said individual cases in which service members refuse to get vaccinated will likely be handled at the command level.

Vaccine holdouts have expressed a number of reasons why they have yet to get the shots.

A senior airman stationed in Georgia who spoke on the condition of anonymity said he has not had the shots because he has concerns about the messenger RNA technology used in the Pfizer and Moderna vaccines, a new technique to elicit an immune response. The vaccines are the first to use the technology after 30 years of research.

"Once FDA approves it, you know, I'm all for it," the airman said. "I go out, and I wear my mask. ... I don't think COVID is something that should be downplayed. I will have no problem taking the vaccine. It's just not FDA approved yet."

He added that he also is concerned that the Department of Veterans Affairs would not be required to provide health care or disability compensation to those who received it on a voluntary basis, should the vaccine cause long-term health effects.

"Let's say somewhere down the road, we come down with some disability because of something that was caused by the vaccine. That's not to say it will happen, but if it does, and come back to the VA, they're gonna be like, 'Well, it was voluntary at the time -- you got it under your own free will,'" he said.

Once service members are officially required to get the vaccine, Kirby said, their status will be tracked in their electronic medical records, along with other inoculations.

But details on exactly what the new policy will mean for service members are still scarce and will be laid out in an upcoming order.

The Pentagon believes the services have enough vaccine doses on hand to inoculate everyone, Kirby said.

The services will have to periodically report to Austin on how well the vaccination effort is going, Kirby said, but how that will work still has yet to be determined.

The exact number of active-duty personnel who have received the vaccine has not been released.

Kirby said Monday about 73% of the active-duty force has received at least one vaccine shot, and roughly 62% are fully vaccinated.

According to Defense Department data released last week, the numbers are lower across the services when including the Reserve and National Guard forces, with 50% of all U.S. troops fully vaccinated and another 11% with at least one dose.

More than 212,000 military personnel have contracted COVID-19, giving them natural immunity to reinfection for at least eight months, according to research -- a common reason some say they don't need the vaccine.

However, immune responses differ in individuals, and vaccines evoke a stronger, more universal response, which scientists say could protect people longer than natural immunity alone, according to research published in June in the journal Science Translational Medicine.

Concern about the Defense Department's previous handling of the anthrax vaccine rollout also is cited by hesitant service members as a reason for not wanting to get the COVID-19 vaccine. The DoD launched a mandatory anthrax vaccine program in 1998 using an immunization that had been authorized under emergency use. Nearly immediately, troops reported side effects, including fever and chills, nausea and body aches.

The airman cited the anthrax vaccine program as one of the reasons service members are concerned about the vaccine. He described Austin's decision as a "bad move on his part ... given that already too many people in the military really don't trust their government."

But, he added, he now will get his shot.

"I have it in writing that it was mandatory," he said.

In his memo, Austin recommended that troops just go ahead and get their vaccines.

"I strongly encourage all DoD military and civilian personnel -- as well as contractor personnel -- to get vaccinated now and for military Service members to not wait for the mandate," he wrote.