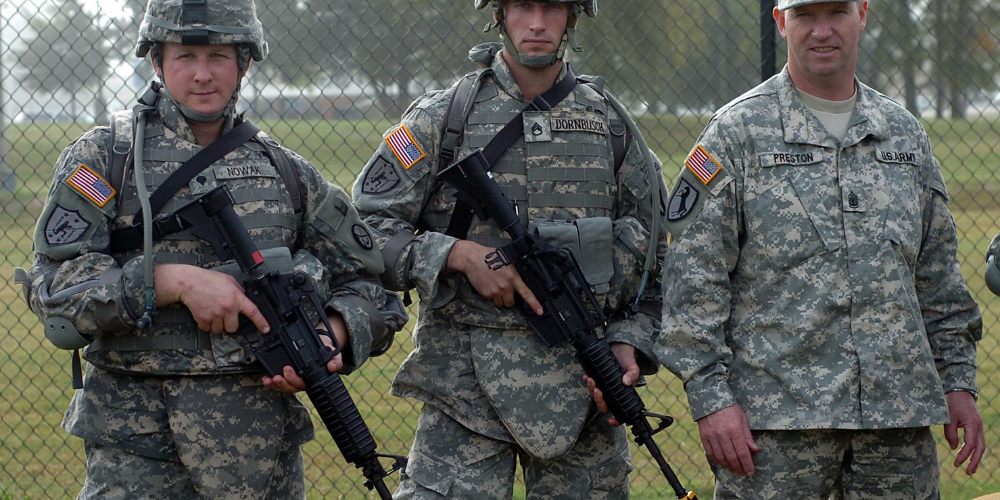 With much of New Orleans dark and entire swaths of coastal Louisiana without phone service or power as of midday Monday, U.S. Coast Guard members and National Guard units from Alabama, Louisiana, Mississippi and Texas are busy conducting search-and-rescue operations and assessing damage left by Hurricane Ida.

The Category 4 storm made landfall near Port Fourchon, Louisiana, on Sunday, barreling northward with winds of up to 150 miles per hour. While the hurricane weakened to a tropical storm Monday, it left behind flooded roadways, damaged roofs and downed power lines across low-lying coastal areas, including the city of Houma.

The Coast Guard conducted one of the first rescue operations of the storm early Monday, transporting seven patients from a hospital in Galliano, Louisiana, Gov. John Bel Edwards said during a press conference.

"They were able to fly before any other assets could," Bel Edwards said during a briefing for President Joe Biden. "You probably saw the hospital that had the roof completely taken off yesterday. Your Coast Guard rescued and relocated those patients, and we're very appreciative of that."

Before the storm made landfall, the service had moved in forces from U.S. Coast Guard Aviation Training Center Mobile, Alabama, and Coast Guard Air Station Houston, Texas, to prepare for any search-and-rescue operations, as well as damage assessments.

Aircrews from Coast Guard Air Station Cape Cod, Massachusetts, and elsewhere, including North Carolina, Texas and Louisiana, were deployed to the region ahead of the storm, according to official Coast Guard social media pages.

The service also is monitoring the positions of 22 barges that broke free on the Mississippi River, which reversed course for four hours as the result of Ida's winds and storm surge, according to the U.S. Geological Survey.

Capt. Chris Hulser, commanding officer of the training center in Mobile, told CBS News on Monday morning that the service planned to begin overflights at daylight.

Also participating in the federal response are about 5,300 National Guard members, including more than 5,000 from Louisiana, according to National Guard Bureau spokesman Wayne Hall.

The U.S. Army Corps of Engineers sent in a team Monday to help restore power, along with emergency operations center personnel to support flood management and response.

The Coast Guard and National Guard responses to the hurricane come as both forces are busy elsewhere: The Coast Guard currently has hundreds of members deployed to Haiti for humanitarian relief operations following a 7.2-magnitude earthquake that struck the southern portion of that country Aug. 14.

And the National Guard has more than 13,000 members deployed across the country for COVID-related missions, in addition to at least a thousand members who are in Kuwait and Afghanistan.

Ida made landfall roughly 45 miles west and 16 years to the day after Hurricane Katrina struck Louisiana and Mississippi.

One person is confirmed dead as a result of the storm, killed when a tree fell on his home in Ascension Parish.

This news has been sourced from https://www.military.com/daily-news/2021/08/30/coast-guard-national-guard-forces-begin-rescues-and-aid-response-hurricane-ida.html