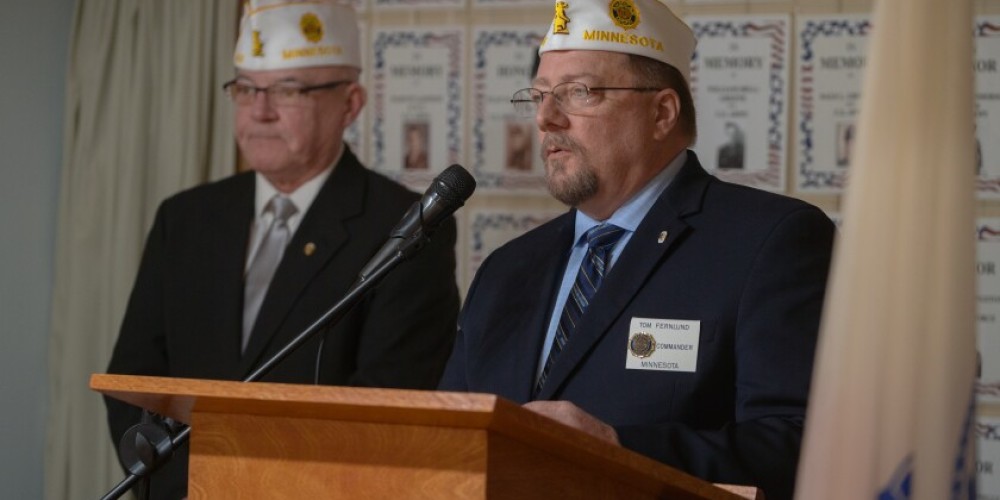 The National Commander of The American Legion, Paul E. Dillard, came to this Southeast Minnesota community Tuesday to discuss issues and legislative priorities critical to the nation’s veterans.

The luncheon, held at the Dodge Center American Legion Post 384, drew an estimated 70 legion members and their spouses from around the region, including Kasson, Hayfield, Stewartville and St. Charles.

Dillard, a Vietnam veteran from Texas, spoke about suicide prevention (more veterans die by suicide than in combat), getting coverage to veterans exposed to toxins, and ways to honor World War II vets, a once 16 million-strong population that has dwindled down to 230,000 aging veterans.

The event in Dodge Center was part of a statewide tour by the national commander, including stops in Red Wing, Owatonna, Austin, Blue Earth and Fairmount.

Dillard said that 18 to 22 veterans die by suicide every day, and anecdotal evidence suggests something as simple as a phone call can save a veteran’s life.

Legislation before Congress would direct the Secretary of Veterans Affairs to designate one week each year as “Buddy Check Week.” It would require the VA to provide educational opportunities, materials and references for veterans to learn how to conduct personal wellness checks.

Veterans disproportionately die by suicide compared to those in the non-serving population, and hundreds per year could be saved by such added awareness and calls, Dillard said.

“We’ve heard people talk about needing someone to talk to, someone to take them to a doctor’s appointment or pick up a prescription,” Dillard said during an interview. “We think that can save lives.”

Another effort Dillard highlighted would expand eligibility for veterans exposed to burn pits in Iraq, Agent Orange in Vietnam and atomic radiation. Called “Honoring Our PACT Act,” the legislation would guarantee health coverage to veterans suffering from 23 presumptive illnesses related to their exposure.

“It’ll be the most comprehensive toxic exposure bill ever passed,” said Dillard, who urged Legion members to contact their legislators and urge them to support the bill. “We need to get the health care benefits to them so they can get the care now, and not let the 42 years or longer pass like it was (for Vietnam veterans exposed) to Agent Orange.”

Dillard was elected national commander of the 1.9-million-member organization last year on the platform “No Veteran Left Behind.” When asked whether society does a good job taking care of veterans, Dillard replied, “No.”

“I think they want to, but they don’t really,” Dillard said.

There are 320,000 veterans in Minnesota, 6% of the state's population. Membership in the legion has been in decline over the last decade. But that may be changing.

Growing members is critical, because The American Legion is an important voice on veteran issues in Congress. And if the Legion and other veteran organizations “don’t protect the earned benefits of veterans, nobody will,” Dillard said.

Some young veterans associate The American Legion as a gathering of old warhorses who like to swap war stories. Legion officials are urging posts to get members involved in their communities in ways that appeal to younger veterans.

Dillard also spoke in favor of a measure that would exempt World War II veterans from means-testing to determine eligibility for VA health care or nursing home care. As many as 300 WWII vets are dying each day, and there could be as few as 100,000 of these veterans remaining next year.

“We need to let those guys know how grateful this nation is to their service,” Dillard said. “There were 16 million of them that came back. And we got less than 230,000 or less today. We did this for our Spanish American veterans and also for our World War I veterans. It’s time we do it for our World War II veterans.”