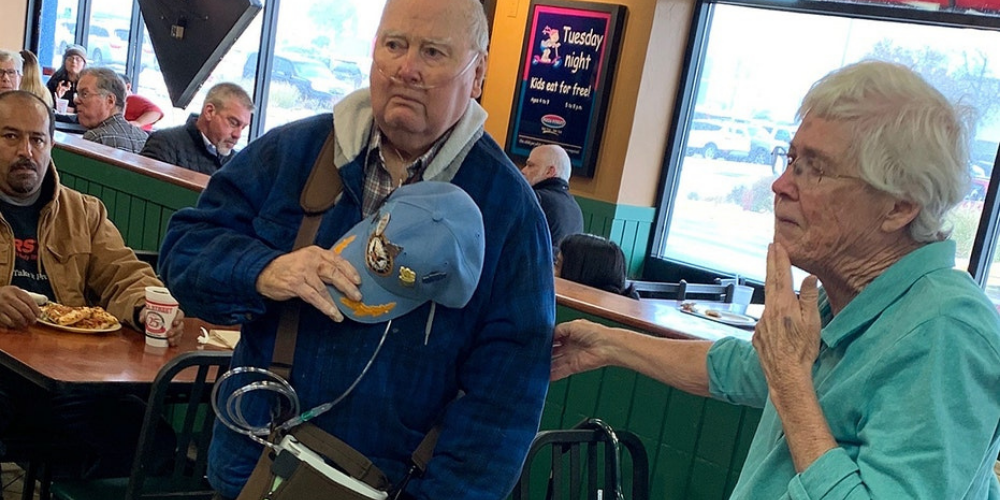 A middle school chorus eating at a pizza joint in Kansas stopped in their tracks when they saw a Navy veteran eating with his wife.

The group of 30 students made a pit stop at Pizza Street in Olathe on Veterans Day in November 2019 before making their way to sing at a local senior citizen's home, Mission Trail Middle School chorus teacher Teresa Murray Posey told Fox News.

However, while inside the pizza shop, Murray Posey caught another customer – Roy Fred Blackburn. Her attention turned to his veteran's hat, she said.

Blackburn – who served in the U.S. Navy for six years – was in hospice at the time, but for Veterans Day, he wanted to indulge in some pizza.

Although it was a simple gesture, Murray Posey recalled thinking, "let's sing to him."

So, she turned to her students and asked if they would be willing to sing the national anthem. Without hesitation, they agreed.

"He was on oxygen and he stood up and took his hat off and his wife stood up,"' Murray Posey said.

The entire restaurant stopped what they were doing and stood up alongside the veteran, she said.

"They were crying. They were all in tears. The restaurant was in tears," Murray Posey said.

Afterward, the kids lined up to hug Blackburn. In February 2020, just three months after their simple act of kindness, Blackburn died at 82.

However, the kids left such an impact on him; they were asked to sing at his funeral.

For a second time, the children of Mission Trail Middle School were able to pay tribute to the veteran who spent years giving back to his community. After leaving the U.S. Navy, Blackburn had spent over two decades as a firefighter officer in Johnson County, according to his obituary.