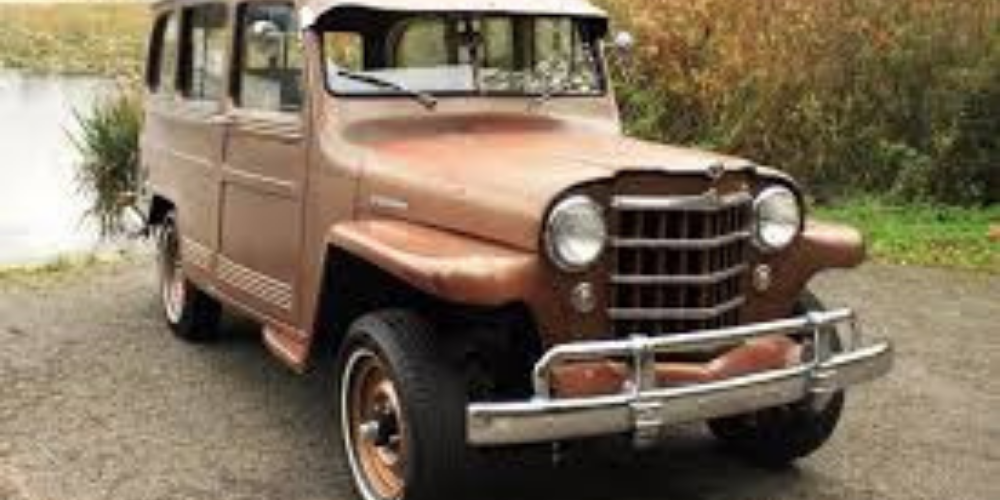 Whenever Herb and June Cook take their open-top vehicle out for a drive, they receive much attention. The couple has grown used to stares, pointing fingers, honking horns and waving hands and realize it does not come because two octogenarians are riding in a convertible. Their mode of transportation may be one of just four in the nation.

“I’ve been into old cars for years and years,” says the Korean War veteran who has restored several vehicles, including a 1941 Oliver tractor and a 1939 Plymouth Coupe, both of which were received in pieces. Cook had to drive to several locations to collect the car’s parts.

“We built a car, is what it amounted to,” he says with a grin. “It had been taken apart. The body was in one place. The frame was in another. The hood, trunk lid and doors were in Mount Morris.”

After he got home, he spent two days sorting through a basket of chrome pieces, not knowing where they went or if he had all of the pieces to the puzzle. He replaced the engine with a 360 Chrysler V-8 and converted the car from a manual transmission to an automatic. This was the only year this car had square headlights.

One evening, about eight years ago, when Cook was reading the newspaper while sitting in his favorite chair, his wife showed him an interesting image on her computer screen. The picture was that of a red Radio Flyer wagon that was drivable.

He began looking for a used truck, but not just any truck. He wanted a Ford Ranger or a Chevy S-10, and it had to be pre-1996 because he did not want to get into emissions testing. After a year of searching, he paid $600 for a 1993 Ford Ranger, which he had towed to his house.

He used a laser to square the body. He admits he was obsessed and spent many hours working on the project, with his faithful helper, June, at his side.

The chassis, engine and driveline were readied. They had seen pictures of a few other Radio Flyer vehicles, each made of wood by this time. Cook knew he wanted the body made from steel. He also knew he wanted his project to be made to look exactly like a Radio Flyer Wagon after seeing pictures of one that was completely out of proportion.

“I told my wife I’ve never been able to paint the plywood and have it come out looking like metal.”

He knew he would have to find someone with a break large enough to handle bending the steel for the project. After investigating and talking to friends, he learned about Maple Grove Enterprises, a metal fabricator located in Arcade, New York. This business was able to do the job, but they thought of things Cook hadn’t and were able to make suggestions to bring the project to fruition.

The two-inch angle iron was attached between the sides and the floor for connecting the body. Cook was in a quandary about what would be best for a windshield until one day when he saw a Jeep and knew his answer had been found. The fabricators made special brackets to hold the windshield in place.

There are two hoods on the wagon. The outer hood weighs approximately 150-pounds. He uses a floor crane on large casters to lift the hood, which he built in his shop. There is an air cylinder under the front with a small air compressor, should he need to lift the hood when away from home. To use it, he would put the tongue down, release the safety catch and push a button to start the air compressor. He also had to design a special filler pipe inside the box due to not wanting a gas cap on the outside of the wagon body. Installation took a day and a half. The project was painted International Harvester red, as it most closely resembles the red on Radio Flyers.

Mrs. Cook measured and made patterns for the upholstery and carpet.

“It was quite a process. She spent three days cutting paper patterns,” her husband said.

The owner placed a 300-pound solid steel block underneath the recessed compartment where RV steps fold when not in use. The weight was added for traction, but the added benefit of a quiet ride has been enjoyed.

Success was achieved and Mr. Cook couldn’t be happier with the end result, which took a year. The 3,500-pound, 15-foot vehicle is registered with the New York State Department of Motor Vehicles as a 1993 Ford Ranger. It is never taken out of its bay in inclement weather and has never been in the rain. The farthest it has been driven was to an antique truck meet in Stafford, New York. The man who sold the truck to Cook has been taken for a ride in the transformed vehicle. Seven years later and an additional 8,000 miles, the 3-liter V-6 engine is going strong and has never been overhauled.

“It drives like the original pick-up,” the proud owner said. “I’ve done two or three crazy things in my life. That wagon was one of them. I said when I built this that I didn’t care about winning any trophies, but if I can make some people smile….”

Recently the couple had the Radio Flyer at a cruise-in where there were approximately 100 vehicles. The Cooks received one of three trophies that were awarded after 400 spectator votes were counted.

Mr. Cook and a buddy were drafted in 1953 and left Buffalo at the same time. When Cook got on the ship in Korea in April of 1955 for the journey home after discharge, he found that same buddy had already boarded. When the friend heard Cook would have to find housing, he offered to rent a room to him in house own house.

During his time in Korea, some friends in Gowanda heard the soldier had received a Dear John letter from the girlfriend he had been writing to back home. They encouraged June, their roommate, to write to the soldier. The couple exchanged letters for six months before meeting. The 88-year olds will be married 65 years in September.

Mr. Cook spent 32 years working with the state Department of Transportation, the last 17 years as the shop foreman. When he retired at the age of 55, to keep busy, he started a business repairing starters, alternators and generators at his home. When the customers came to get their parts, they found they had been cleaned and painted.

“When they went out from here, they looked like brand new,” says the active man.

He had customers from Hamburg to Jamestown that heard of his work through word of mouth. Therefore there was never a need to advertise for the 29 years the business was in operation.

“I’ve probably done two-thirds of the work in Western New York,” he said as he tells about the time he installed an alternator in a broken-down ambulance with a patient onboard.

His wife was a legal secretary for 30 years until she left that work to do her husband’s office work.

They have never let much grass grow beneath their feet throughout their married lifetime. They rode for 42 years as motorcycle enthusiasts, including annual summer vacation trips when they hauled a trailer behind. They were accompanied on many of these trips by Mr. Cook’s friend from elementary school and his wife, Herb and Ardis Ahlers, including a two-month 9,000-mile cross-country trip. The Cooks’ initials were on their bike license plates throughout the years and were reversed on their automobile plates.

At 70 years of age, the couple sold their home of 41 years and had a new home erected. They had a 34-foot by 60-foot shop built near the house and worked together to finish the interior. He still mows and maintains two and a half acres of lawn.