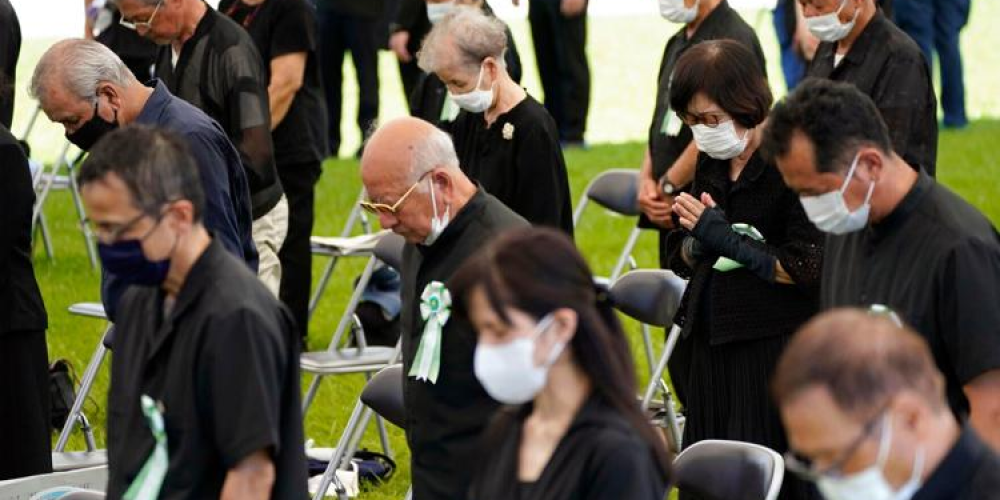 Local fears grow as Okinawa marks the 77th anniversary of the battle that ended World War II, and the governor calls for further reduction of U.S. military presence.

Nearly half of those killed in the Battle of Okinawa were Okinawan citizens. Japan's wartime forces sacrificed the local populace to prevent a U.S. landing on the main islands.

Many residents of Okinawa are concerned about Japan's expanding use of amphibious capabilities and missile defense on outlying islands near geopolitical flashpoints like Taiwan.

On June 23, 1945, about 300 people attended a ceremony on Okinawa to commemorate the end of the battle. During a minute of silence, they laid chrysanthemums on the graves of the fallen soldiers. Because of concerns about the coronavirus, fewer people attended.

Gov. Denny Tamaki spoke at the ceremony in Itoman city on the main island of Okinawa. He said that the destruction of towns, buildings, local culture and the ongoing fear of the Ukrainian people "reminds us of our memory of the ground battle on Okinawa that embroiled citizens 77 years ago."

May marked the 50th anniversary of Okinawa's return to Japan after two decades of U.S. occupation.

70% of U.S. military installations and the majority of the 50,000 American troops currently stationed in Japan as part of a bilateral security agreement are still located in Okinawa, which makes up just 0.6% of the territory of Japan.

According to Tamaki, Okinawa is subjected to American soldier-related noise, pollution, accidents, and criminality due to the American bases.

In addition to increasing support for the island's economic development, which lagged during its 27-year U.S. occupation, Kishida acknowledged the need for further government measures to lessen the burden that Okinawa bears from American military bases.

There is deep resentment and dissatisfaction in Okinawa over the American presence and Tokyo's failure to engage Washington in talks on dividing security responsibilities between the main island and the southern group of islands.