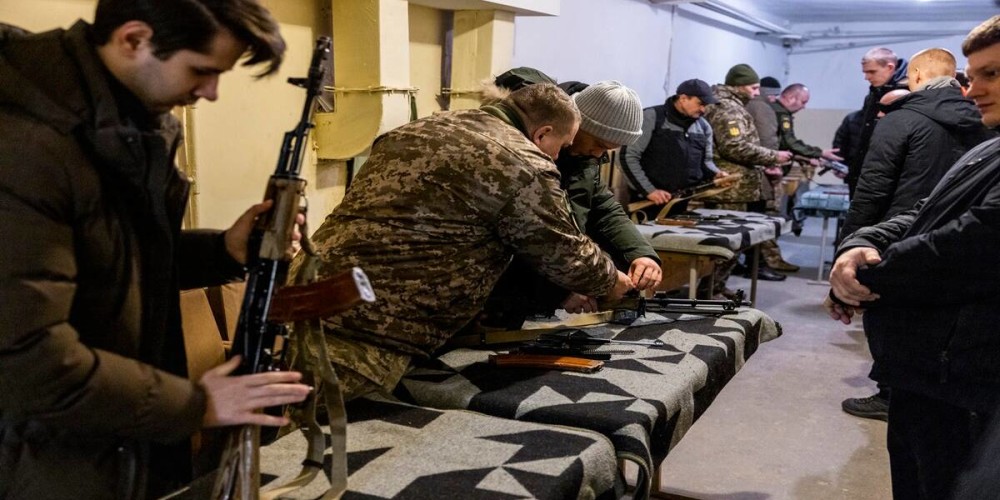 Like many people around the world, I viewed the images that have emerged in the last few days from Bucha, Ukraine, with horror and fury.

But although I understand this intellectually, and although I saw my fair share of human suffering as a soldier in Iraq, the seemingly endless mass graves and the bound and desecrated corpses left behind in Bucha by the fleeing Russian military felt to me some new circle of hell.

I looked away from the images at some point. We all have our limits. Then I couldn’t stop picturing the faces of other Ukrainians on those fallen bodies — faces of people I know in the country who are still alive.

I recently returned home from Lviv, Ukraine, where I’d spent a few weeks with friends and fellow combat veterans of Iraq and Afghanistan training Ukrainian civilians in basic urban-combat and survival tactics. We flew there on our own dime and volition because we saw a sovereign democracy under assault and believe that is wrong. Lviv is 300-plus miles to the west of Bucha, but the difference between those civilians we trained and those who were massacred is just a matter of geography.

During our many hours together, I got to know our trainees on a personal level: There was the idealistic law student; the gruff middle-aged geography teacher; the cheerful I.T. worker. They’re parents, neighbors, churchgoers and businessmen. Regular people with regular lives who never thought they’d be put in a situation where they might have to pick up a gun to defend themselves and their families. Yet here they were, preparing for that very possibility.

The Ukrainians gave us their time and commitment. In turn, we gave them experience and hard-earned wisdom. It was one of the most fulfilling experiences of my life, and I have no doubt that if Russian soldiers reach Lviv, these civilians will resist occupation, in various ways. If our training didn’t instill the courage and will to fight in them, Bucha certainly has.

Since returning home to the United States, my fellow trainers and I have been deluged with messages from other veterans asking if they should go to Ukraine. Their motivations are many; some are natural first responders and helpers, deeply committed to the principle of service.

Others long for the purpose that their previous lives in uniform provided (or the purpose they remember it providing — memory’s a hell of a thing). Some seem to be seeking something like absolution for their part in the wars in Iraq and Afghanistan, which went amiss early on and which no amount of money or time could make clean.

And a few — not many, but a few — want the opportunity to shoot a Russian invader in the face in the name of democracy. I don’t mention this flippantly. Existential fights such as Ukraine’s need such people.

Should these men and women go to Ukraine? It depends. Do the would-be volunteers have a family? A life insurance policy that covers death in conflict zones? Do they have contacts already on the ground, a clear exit plan, means to fund lodging?

This is a small sampling of the questions I asked myself before flying overseas with the other trainers. To me, there’s a moral clarity to helping defend Ukraine that distinguishes it from many modern conflicts. But that has little to do with the practicalities involved of actually being able to contribute. Why and how must not be conflated.

Those considering traveling to Ukraine must ask themselves how they will provide something the Ukrainian people lack and need.

This is what best separates those who should go, if able and willing, from those who should find other ways to support the cause. To a person, those who know they can help there have already identified areas of need. Take, for example, a former Special Forces medic who has a month between jobs and would like to treat wounded refugees and train civilians in combat medicine. That’s someone who can make a direct, immediate difference.

Then there’s the other type of potential volunteer. We called them “goons” on our way home while in Krakow, Poland, where many mill about, as it’s become a staging ground for the war across the border. Goons are easy to spot — loud and obvious, usually dressed in fatigues and sometimes adhering to extremist ideology. Some even sincerely want to help. They just don’t know where, or how.

Some of these people have figured their way into the war, joining Ukraine’s newly formed foreign legion and fighting Russian troops around Kyiv. There have been mixed results. “We should only take experienced combat veterans — that is the lesson that we are learning,” a Ukrainian general told Task & Purpose last month. “The others don’t know what they are getting themselves into.”

This foreign legion has drawn a lot of media attention since President Volodymyr Zelensky put out the call for international recruits in late February. The Defense Ministry claims upward of 20,000 fighters from 52 countries, with 3,000 Americans in the ranks. Harrowing anecdotes from legionnaires have emerged since, tales of not enough training and equipment, along with a pronounced absence of oversight from Ukrainian officers.

“What’s different with the U.S. military and all the other NATO militaries — they’re spoiled,” an American legionnaire told Vice News. “When it comes to fighting a war, they have air support, medevac, logistics, all kinds of different levels of intelligence and support.” In Ukraine, he said, “we had none of that.”

There’s also been a documented lack of trust and cohesion in the foreign legion, and Antonia Hitchens, writing in The New York Review of Books, was told that the more professional foreign fighters are finding placement in the Georgian National Legion, a separate, more established paramilitary unit fighting for Ukraine, as a result. Recruitment for the Ukrainian foreign legion has reportedly been put on hold.

Whatever’s one motivation, whatever one’s purpose, the risk of simply being an American in Ukraine is tremendous. At least two U.S. citizens have been killed there — James Whitney Hill, who died during Russian artillery shelling on the city of Chernihiv, and the documentary filmmaker and journalist Brent Renaud, who was shot while reporting in Irpin, a suburb of Kyiv.

During our time in Ukraine, rumors that Americans were among the legionnaires killed in the cruise-missiles attack on the Yavoriv military base were persistent; a source in Ukraine’s Ministry of Defense whom I questioned about these claims refused to confirm or deny them. And on March 31, the U.S. State Department spokesperson, Ned Price, said, “Russian government security officials in both Russia and in Ukraine may be singling out U.S. citizens.”

There’s little doubt an American captive, particularly a veteran, would be a propaganda coup for the Kremlin. It’s also plausible that a veteran would be treated as a combatant, regardless of his or her actual work in Ukraine. There must now be thousands of Americans in the country, working in both military and humanitarian capacities. I fear it’s a matter of when, not if, one of them falls into Russian hands and becomes the main character in a cautionary tale.

There is also the not-insignificant factor of the American government to consider. The State Department has been clear: American citizens should keep away from Ukraine. Washington’s financial and “lethal aid” support seems to me the correct approach; even the Ukrainian government seems to understand why more direct intervention cannot occur.

Yet there are no legal barriers to Americans going to Ukraine. In my experience, the only thing Customs officials seemed to care about when they saw Ukraine stamps in my passport was whether I was transporting weapons. (I was not.)

One of the best things about being an American is we don’t need to wait around for our government to give its permission. Discouraging my fellow veterans from going to Ukraine would be both hypocritical and disingenuous. There are people there suffering, and despite America’s many recent ills and failures, our country is still viewed by many in Eastern Europe as a beacon for democratic values and ideals. That matters, I think, even in a world on fire.

Morally righteous and practically sound support is what Ukrainians need from others right now.

The former without the latter will only burden them. There are people who know they can help, and people who hope to. Understand the difference before getting on a plane.