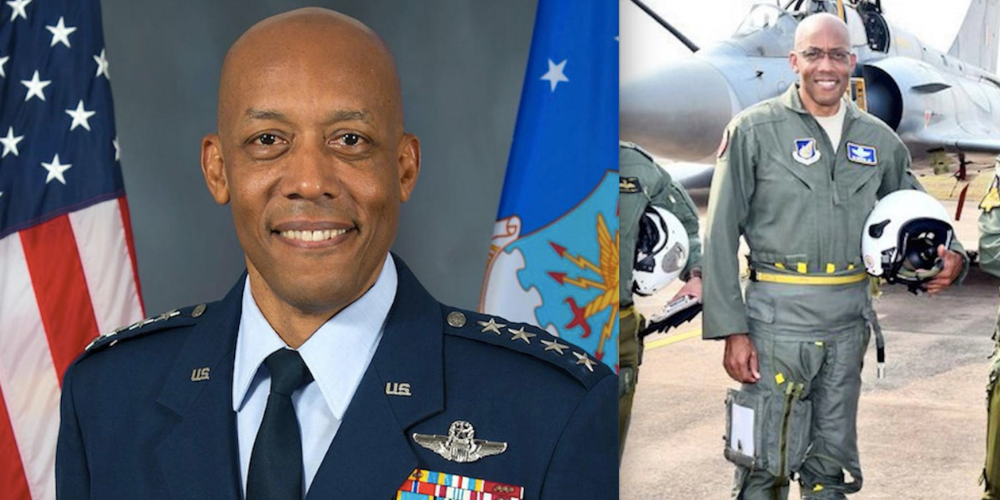 The ad is simple: Air Force Chief of Staff Gen. Charles "C.Q." Brown is wearing camouflage, seated in a hangar and speaking directly to the camera, his words punctuated by electrifying videos of pilots pushing the envelope.

"When I'm flying, I put my helmet on, my visor down, my mask up," Brown says in the recruiting spot. "You don't know who I am -- whether I'm African American, Asian American, Hispanic, white, male or female. You just know I'm an American airman, kicking your butt. I'm General C.Q. Brown Jr. Come join us.

The ad first aired July 17 before the NBA Finals, reaching nearly 3.8 million people during the pregame show, and it has garnered widespread praise on YouTube, with 124,000 views as of Friday.

"This makes me want to join the Air Force instead of the Army," another added.

Read Next: Drone That Struck Oil Tanker and Killed 2 Was Made in Iran, US Military Says

According to Brown, a script was written for the ad, but the words were all his. During downtime while doing voiceovers for two other recruiting commercials, he spoke with the director and recalled an interview he had previously done on diversity.

"When I get in the airplane and I put my visor on and put my mask up, you don't know if I'm African American, you don't know who I am," Brown said during an interview at the National Press Club in Washington, D.C., on Friday. "Earlier this year, at a woman's forum, I said essentially the same thing. The director said, 'I think we want to take that.'"

"The ad, titled "Helmet," is designed to illustrate the strength of airmen regardless of gender or race. It follows an Army ad campaign, "The Calling," which also focused on diversity but garnered a much different reaction on social media.

In one Army ad, titled "Emma," Cpl. Emma Malonelord described how her mothers, both strong female role models, influenced her decision to join the military.

At one point, the Army had to close the comments section on YouTube because of the negative response to the ad.

Brown said Friday that his goal is to break down "any type of barriers" for recruitment, adding that he has been reviewing policies and programs to ensure they don't put members at a disadvantage when joining the service or pursuing their careers.

A review of racial disparity in the Air Force by the service's inspector general released last December found that Black airmen are nearly twice as likely to be suspects in a military criminal investigation, arrested or apprehended by base patrol, or involuntarily discharged based on misconduct.

The report also found three of every five Black airmen and Space Force guardians believe they would not get the same benefit of doubt as white airmen if they get into trouble.

The service launched the review last year as the nation began exploring questions of racial injustice and systemic racism following the death of George Floyd in police custody in Minneapolis in May 2020.

In a video made days after Floyd's death, Brown, who is the first African American service chief, noted that Blacks make up just 2% of the Air Force's 15,000 pilots -- something he'd like to see changed.

At the National Press Club event, Brown said that, while he was serving as Pacific Air Force commander, he was questioned when he parked in his designated spot at the post exchange.

"Someone ran up to me and said, 'That's the PACAF's parking space!'

"'Yeah, I know,'" Brown replied. "That was one of those cases where people just assume."

Brown promised that change will come, first, as the result of him sitting in the Air Force's top office -- "young people only aspire to be what they can see," he said -- and by adapting training and technologies to draw new airmen to the service.

"The thing we got to do is ensure that we provide opportunity but also talk about those who actually have been put in positions where [recruits] can see, 'Yes, you can do that. Don't sell yourself short.'"