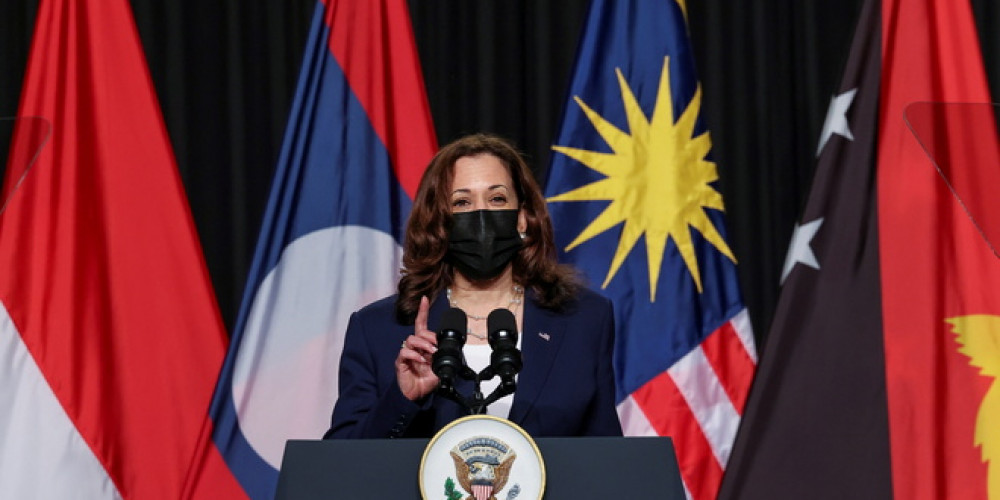 HANOI — Vice President Kamala Harris called on Vietnam to join the U.S. in challenging China’s “bullying” in the South China Sea, continuing her sharp rhetoric against Beijing as she met with Vietnamese leaders on Wednesday.

“We need to find ways to pressure and raise the pressure, frankly, on Beijing to abide by the United Nations Convention on the Law of the Sea, and to challenge its bullying and excessive maritime claims,” she said in remarks at the opening of a meeting with Vietnamese President Nguyen Xuan Phuc.

Harris also expressed support for sending an additional U.S. Coast Guard cutter to Vietnam to help defend its security interests in the disputed waterway and pledged that the U.S. would “maintain a strong presence in the South China Sea” to challenge China.

During remarks in Singapore on Tuesday, Harris said Beijing’s actions to press its territorial claims in the South China Sea amount to “coercion” and “intimidation.”

The vice president's rebuke of China comes in the middle of her week-long tour of Southeast Asia, a trip that brought her to Singapore and Vietnam in a bid to strengthen U.S. ties to the Indo-Pacific region to counter China's growing military and economic influence there.

In addition to her commitment to defending the South China Sea against Beijing advances, Harris unveiled an array of new partnerships and support for Vietnam in areas including climate change, trade, and the coronavirus pandemic.

She announced that the U.S. will send 1 million additional doses of the Pfizer vaccine to Vietnam, bringing the total U.S. vaccine donation to Vietnam to 6 million doses.

The U.S. will also provide $23 million to help Vietnam expand distribution and access to vaccines, combat the pandemic and prepare for future disease threats. The Defense Department is also delivering 77 freezers to store vaccines throughout the country.

Vietnam is grappling with a new coronavirus surge driven by the delta variant and low vaccination rates. Only about 2% of the country's 98 million people are fully vaccinated, and the surge in cases prompted a recent lockdown in Ho Chi Minh City, the nation’s business hub and the center of the latest outbreak.

The new U.S. aid to Vietnam includes investments to help the country transition to cleaner energy systems and expand the use of electric vehicles, and millions in aid to clear unexploded weapons left over from the Vietnam War.

That U.S. war has returned to the spotlight over the past week as the U.S. struggles with a similarly messy end to the Afghanistan War. Images of the evacuation of Kabul, as the Taliban took full control of Afghanistan, evoked similar shots of U.S. helicopters lifting off from the U.S. Embassy in Saigon decades prior, prompting comparisons between the two failed wars.

On Wednesday in Vietnam, however, Harris referenced the progress the two former foes have made, telling Vietnam’s president that “our relationship has come a long way in a quarter of a century.”

She also embraced elevating the relationship with Vietnam from a comprehensive partnership to a strategic partnership, a diplomatic designation that would reflect the deepening ties between the two countries.

After her bilateral meetings, Harris took a moment of silence in the pouring rain and laid flowers at the monument where John McCain’s plane was shot down by the North Vietnamese in 1967. She noted it was the three-year anniversary of Sen. McCain’s death.

For Harris, the focus this week has been on developing U.S. ties in the region to offer a strong contrast to China, which has also sought to woo Singapore and Vietnam with economic support and vaccines. While she emphasized during remarks in Singapore on Tuesday that the U.S. policy in the region is not merely about countering any one nation, the Biden administration has made confronting China globally a centerpiece of its foreign policy.

Chinese Foreign Ministry spokesperson Wang Wenbin responded to Harris’ Wednesday comments by accusing Washington of simply seeking to defend “U.S. hegemony and its own interests,” rather than standing up for the rights of small countries.

In the afternoon, Harris announced the launch of a new Centers for Disease Control and Prevention Southeast Asia regional office. The new office will be one of four regional CDC offices globally and is focused on collaborating with regional governments on research and training to deal with and prevent global health crises. She said that while combating the current pandemic is a priority, “we must be, if we are honest, better prepared for the next one.”

But even as Harris aimed to keep her focus squarely on those key agenda items, her visit was shadowed by a recent security scare in Vietnam.

Harris’ flight to Vietnam was delayed for hours Tuesday afternoon after the vice president’s office was made aware of an investigation into two possible causes of the so-called Havana Syndrome in Hanoi, according to administration officials. The Havana Syndrome is the name for a rash of mysterious health incidents first reported by American diplomats and other government employees in the Cuban capital beginning in 2016 that have since affected diplomats across the globe.

Asked about the incident Wednesday, Harris didn't specifically address the possible causes but instead expressed her gratitude for the work done by America's diplomatic corps.

“The people who work in our embassies around the world are extraordinary public servants who represent the best of what the United States believes itself to be, and aspires to be, which is a good neighbor to our partners and our allies around the globe,” she said after a lease signing for the U.S. Embassy in Hanoi.

This news has been sourced from https://www.military.com/daily-news/2021/08/25/harris-urges-vietnam-join-us-opposing-china-bullying.html