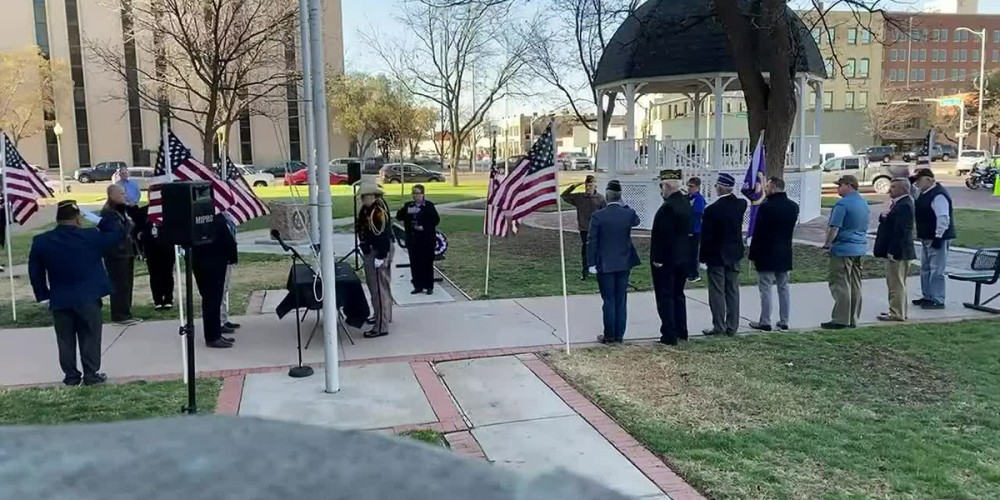 Two deceased Lubbock County veterans with no known next of kin were given full military honors Thursday morning at the Lubbock County Courthouse as their remains began the journey from Lubbock to a San Antonio veterans cemetery.

The two Korea- and Vietnam-era Air Force vets — Robert Martin and Clinton Padrick — were honored with the ceremony performed by the Lubbock Regional Honor Guard, including roll call, 21-gun salute and taps. Bagpipes played solemn music as the remains were placed in a hearse, escorted by the Patriot Guard Riders, bound for Fort Sam Houston National Cemetery.

“The original route started in Amarillo, Potter County and Randall County where they picked up eight remains of veterans that were honorably discharged. They brought them here and those eight brothers were joined by the two that were given today,” Guerrero said.

This is the first time in a decade that unclaimed remains in Lubbock County have been identified as veterans, a task that Guerrero said is about a year-long process.

“The person passes and there’s no next of kin, no one to come and get you. So now the county has the responsibility to do something with you. … They try to find the next of kin and they exhaust all resources,” Guerrero said. “They turn in those names to certain nonprofits to identify who they are, and we just found out these two are veterans.”

“Now we’re starting our homework for the following year to locate some more veterans,” Guerrero added.

“The county courthouse — because that’s the closest thing they have to family — didn’t want to let them go without military honors,” Guerrero said.

County Commissioner Terrence Kovar added during the ceremony, “This right here is proof that veterans might not have living blood family, but they will always have the brothers and sisters of our awesome military family.”