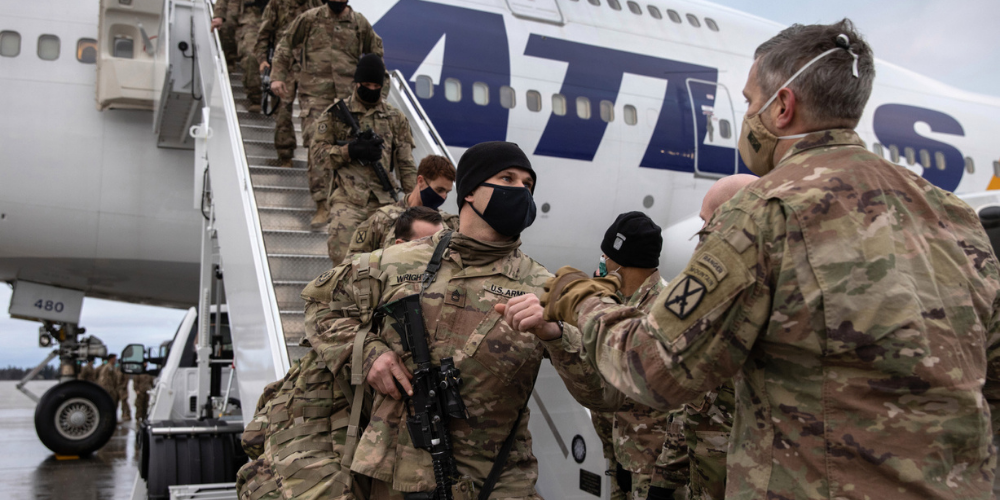 The U.S. military's evacuation from the main airport in Kabul has ended -- along with the nearly 20-year war in Afghanistan.

U.S. Central Command head Gen. Frank McKenzie said Monday the last C-17 Globemaster III took off minutes before midnight Kabul time -- the beginning of Aug. 31, which was the United States' deadline for withdrawal. For the first time since late 2001, weeks after the Sept. 11 attacks, there are now no U.S. service members in Afghanistan.

Reports of celebratory gunfire from the Taliban surfaced online after the final C-17 took off from Kabul.

The final weeks of the war were among the military's hardest, as thousands of troops rushed in to hold Hamid Karzai International Airport as the U.S.-backed Afghan government collapsed with shocking speed and the Taliban rapidly filled the void.

The unprecedented airlift effort to rush to safety Americans and Afghan allies -- the largest noncombatant evacuation operation in U.S. military history -- saw some 123,000 people evacuated in all. Since Aug. 14, more than 79,000 civilians were ferried out by the U.S. military on one flight after another -- primarily C-17s, their massive cargo bays at times packed with hundreds of refugees.

The evacuation effort saw the last flag-draped coffins from the war arrive at Dover Air Force Base in Delaware. The final U.S. casualties came Aug. 26, when a suicide bomber struck at the airport's Abbey Gate, packed with U.S. troops and many Afghans trying to get through. The bomber killed 13 troops -- 11 Marines, a sailor and a soldier, wounded more than 20 other troops, and killed or wounded hundreds of Afghans.

It marked one of the deadliest days of the war for the U.S., with less than a week to go, and brought the final toll of service members killed there to 2,461. There were also more than 20,000 troops wounded in Afghanistan.

"My heart is broken over the losses we sustained three days ago," McKenzie said.

The Islamic State's Afghanistan branch, ISIS-Khorasan, or ISIS-K, claimed responsibility for the attack. The U.S. responded with two drone strikes: one on Friday that killed two people the military claimed were ISIS organizers, and one on Sunday it said targeted a car in Kabul carrying explosive material intended for another attack. The latter airstrike may have resulted in up to 10 civilian casualties, according to reporting by The New York Times that was not immediately disputed by the Pentagon.

ISIS-K and the Taliban are in the midst of their own war, prompting a pseudo-alliance between the U.S. and the Taliban, who have been killing one another for 20 years. McKenzie described the Taliban as "pragmatic," saying the terror group had a vested interest in the U.S. leaving quickly, thus motivating it to try and facilitate a smooth withdrawal by securing areas outside of the airport.

He added that diplomatic efforts to help remaining U.S. citizens and eligible Afghans who want to leave will continue, though the military's role in the evacuation process is done.

Just as the evacuation began, the desperation of some Afghans hoping to escape impending Taliban rule caused an accident that pushed the White House to send in more troops to secure the airfield. On Aug. 16, many desperate Afghans ran onto the airport's grounds and surrounded a C-17 that had just landed to unload equipment. The C-17's crew, concerned about the crowd of people approaching the aircraft, opted to take off again. Afghans ran alongside the plane and clung to its sides, some falling to their deaths, and the body of one Afghan was later found in the aircraft's landing gear.

Maj. Gen. Chris Donahue, commander of the 82nd Airborne Division, and U.S. Ambassador Ross Wilson were among the last U.S. officials to leave Afghanistan. They departed on the final C-17 flight, covered by what McKenzie described as "overwhelming U.S. airpower overhead, should there have been any challenge to our departure."

At the peak of the airlift last week, C-17s were taking off roughly every 45 minutes, and more than 19,000 people were flown out on a single day. On average, the military evacuated more than 7,500 civilians per day, McKenzie said.

The U.S. military evacuated more than 6,000 American civilians, which the Pentagon said represented the majority of those who wanted to leave. The military estimated that only a few hundred wishing to leave remain.

McKenzie said the civilian evacuation ended about 12 hours before the final withdrawal. Some equipment was brought out on the final flights, but other equipment -- such as the counter rocket artillery and mortar, or C-RAM, system and various aircraft and vehicles -- was left behind permanently disabled.

President Joe Biden quickly mobilized 6,000 troops, including the 10th Mountain and 82nd Airborne Division, to secure the airport and aid in the evacuation that followed.

"No words from me could possibly capture the full measure of sacrifices and accomplishments of those who serve, nor the emotions they're feeling at this moment," McKenzie said. "But I will say that I'm proud that both my son and I have been a part of it."

This news has been sourced from https://www.military.com/daily-news/2021/08/30/final-troops-withdraw-afghanistan-ending-evacuation-and-war.html