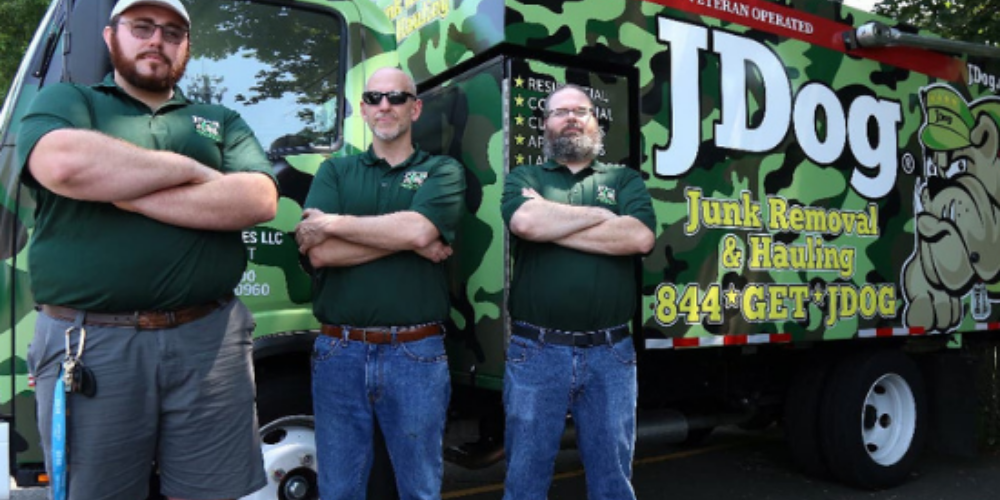 Sean-Michael Green knows the feeling of loss that can come with leaving the military and returning to civilian life.

He was failing out of high school and decided to join the Marines in 1988. He served in Panama during the First Gulf War. He then left active duty, joining the Selective Marine Corps Reserve, where he served from 1992 to 2000. Since then, he's become an entrepreneur and taken on a career in higher education.

Now he's looking to help other veterans navigate that switch with his new franchise, JDog Junk Removal and Hauling. The business opened less than a month ago in Fairfield and served nearly 20 towns from New Haven to the New York line.

JDog, which is a national company, is franchised by and employs veterans and their families. It also donates the items it collects that can be used again to veterans in need.

Green already owns several businesses but decided to start a JDog franchise after hearing about and seeing his brother's experience. Both his brother and father were in the Marines too.

One of the advantages to having a business so focused on veterans is that it helps connect them with others who understand what they're experiencing, Green said.

Green currently employs seven people, all part-time, though he hopes to grow his crew to about 25 people and add more trucks. The Marines, Army and Navy are currently represented.

He said they might struggle to translate their military experience into something civilians will understand when applying for a job. Green said most veterans decide to stay where they were last stationed when they leave the service. But Connecticut only really has the Groton base and the Coast Guard Academy, so Green said most of the state's veterans are people moving back.

Saadi said it's not a lack of programs and services to support our veterans, but often a lack of connecting those veterans in need with those existing resources. He said there needs to be more communication with local and state social service providers, employers and advocacy groups and better online messaging.

Rockefeller said there are various resources for both veterans looking for a job and businesses looking to hire veterans. Rockefeller also encourages veterans to take advantage of the Post 9/11 GI Bill or the Veteran Affairs' Chapter 31 Veterans Readiness and Employment Program for educational benefits.