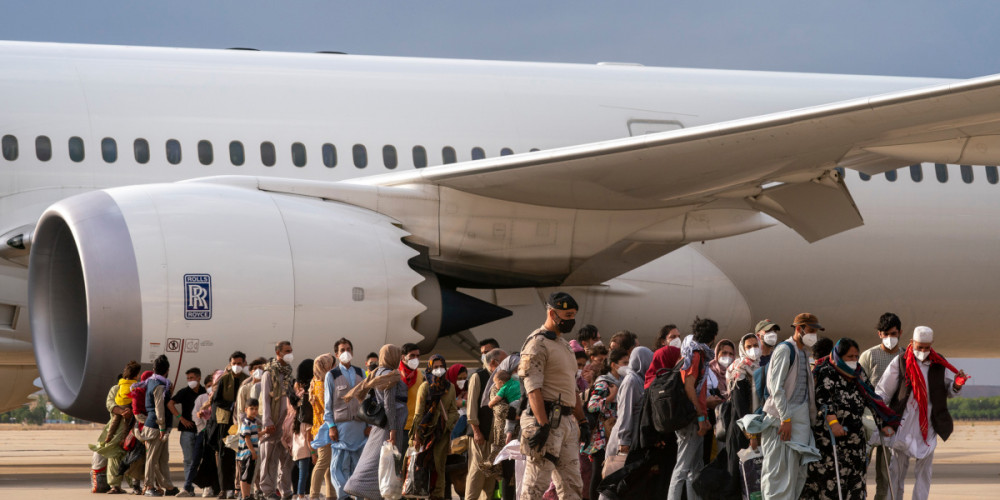 The window to evacuate thousands of Americans remaining in Afghanistan, and even more Afghans and their families who face danger from the Taliban, is closing fast.

On Tuesday, the Taliban hardened its position on the evacuation now underway, flatly ruling out any extension of the U.S. government's planned Aug. 31 deadline to finish its efforts and withdraw all troops. The Taliban also said that, while foreign nationals still are allowed to leave, it would not permit Afghan nationals to travel to Hamid Karzai International Airport in Kabul, the only air transportation hub still in operation in the country.

CNN reported Tuesday that President Joe Biden also has decided not to extend the U.S. deadline, though the Pentagon is preparing a contingency plan in case that cutoff is missed, according to the Washington Post.

This leaves one more week to evacuate as many civilians as possible, withdraw troops and conclude one of the most massive airlift operations in history. How much can be accomplished remains an open question.

The military is seeing signs of progress, moving 12,700 people over the preceding 24 hours as of Tuesday morning via 32 C-17 Globemaster III and five C-130 Hercules flights. With C-17s now taking off approximately every 45 minutes, the military is outpacing its original 5,000 to 9,000 daily goal. Another 57 flights by allies evacuated 8,900 people.

The U.S. military and its allies hope to keep up that pace of more than 20,000 daily evacuations, which, when combined with Monday’s evacuations, would allow the rescue of 100,000 people by the end of this week.

Since Aug. 14, when the military's major evacuation operations began as the Taliban closed in on Kabul, 58,700 Americans; other foreign nationals; Afghan Special Immigrant Visa, or SIV, holders; and other at-risk Afghans have been evacuated. Another 5,200 were evacuated before that.

But within the Pentagon, the sense of time running out is growing. The military needs to evacuate its own personnel, weapons, and equipment before the mission is complete, or destroy or otherwise dispose of items that can't be transported. Pentagon Press Secretary John Kirby was vague on timelines in a briefing with reporters Tuesday but acknowledged it would take several days to safely pull all troops and equipment out.

Kirby repeatedly stressed that the military is committed to getting out all Americans who want to leave and that it has the capability to do so by the end of the month. The Pentagon said Tuesday afternoon that about 4,000 U.S. passport holders, plus their family members, have been evacuated so far.

Reassurances about Afghan citizens were not as forthcoming. While Kirby said the military is working to evacuate SIV applicants and other vulnerable Afghans and pointed out that the vast majority of evacuees so far have been Afghans, he made no commitment to getting out all those Afghans who want to leave.

CNN reported that the airport's gates are now closed to Afghans, for the most part, causing an outcry among activists who have pushed the US. government for months to do more to help those who served as interpreters and other jobs for the American military.

"It is a looming abysmal failure," Kim Staffieri, co-founder of the group Association of Wartime Allies, tweeted Monday evening.

Kirby said that crowds outside the airport are smaller than in the first few days of the evacuation, and the scene is less chaotic.

But there are also problems at secondary locations. Kirby acknowledged sanitation and hygiene conditions at Al Udeid Air Base in Qatar, where some evacuees have been temporarily housed, have been “terrible,” worsened by the overwhelming number of people there and the speed with which they've moved. He said Al Udeid and U.S. Central Command are taking steps to improve conditions.

And fatigue has begun to set in among some airmen engaged in the grueling, round-the-clock airlift operations. The U.S. Transportation Command head Army Gen. Stephen Lyons told reporters Monday that, in some cases, leadership has pulled tired aircrews from rotation to ensure safety issues don't pop up.

But, he said, though some are "probably exhausted," the crews are motivated and eager to finish their mission.

The military is housing Afghans at four stateside installations: Fort Lee in Virginia, Fort McCoy in Wisconsin, Fort Bliss in Texas, and Joint Base McGuire-Dix-Lakehurst in New Jersey, but could add more installations if necessary.

Three babies have been born, all healthy, during the evacuation, including one who was born aboard a C-17.

Air Mobility Command said in a Saturday tweet that the baby's mother went into labor on a C-17 flight from an intermediate staging area in the Middle East to Ramstein Air Base in Germany and began having complications. The pilot descended to increase the air pressure, which helped to stabilize the mother and save her life, the command added. She delivered the child on the aircraft after landing at Ramstein.

The other two children were born at Landstuhl Regional Medical Center in Germany, shortly after their mothers reached Ramstein.

This news has been sourced from https://www.military.com/daily-news/2021/08/24/evacuation-endgame-approaches-taliban-and-biden-hold-fast-aug-31-deadline.html