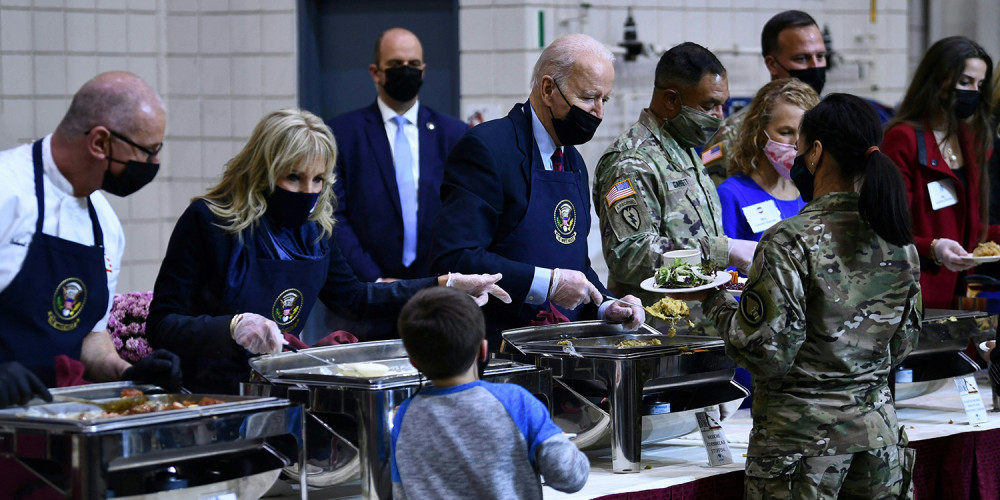 President Joe Biden and the first lady, Jill Biden, took part in early Thanksgiving festivities at Fort Bragg, N.C., and thanked the troops for their service and dedication to our country by helping serve meals to them.

During the president’s speech, he told all of the service members how much their friends and families missed them, especially during the holiday. Biden’s own son, Beau, had served in the military and died of cancer in 2015.

Biden said that he was "damn proud" to serve as commander in chief of the world's best military.

"I know how hard it is to have someone who's not at the table," Biden said. "You do so much and your families give so much."

Before leaving the Army installation, Biden also met with special operations forces who often act as the "tip of the spear" in U.S. military operations, the White House said.

This was Biden’s first trip to Fort Bragg during his presidency, and he was also joined by Roy Cooper, governor of North Carolina.

Many previous presidents have chosen to spend time with service members, however, due to the fact that the president withdrew American forces from Afghanistan, and that the combat mission in Iraq should be over by the end of the year, he chose to visit U.S. forces within the United States rather than abroad.

Former Presidents George W. Bush, Barrack Obama and Donald Trump all traveled to either Iraq or Afghanistan to spend holidays with troops in combat zones during their presidencies.

Biden will next travel to Nantucket, an island off the coast of Massachusetts, on Thursday to spend Thanksgiving with his family, resuming a long-standing tradition that was disrupted by COVID-19 last year.