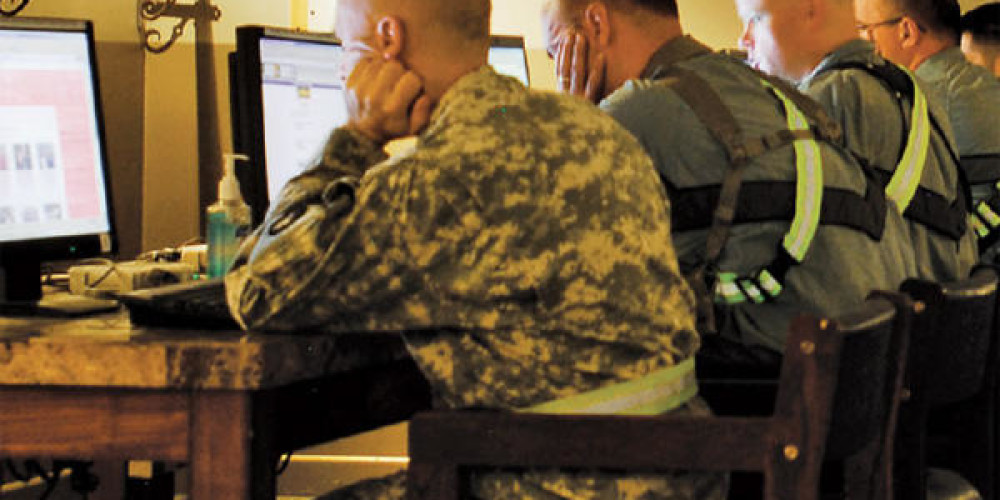 The technology used by military banking institutions and credit unions has come a long way since its inception in the mid-1980s.

Back then, the Department of Defense entrusted the Association of Military Banks of America, or AMBA, with creating an ATM network that would allow military families to withdraw and deposit funds from their accounts while away from home.

However, financial institutions are now developing more advanced services for military personnel spread across the globe, sometimes in remote locations and the Armed Forces Financial Network. The company also offers faster and cheaper ways to convert currency, chatbots to provide customer assistance, and digital loans based on automated credit evaluations.

"Banks such as USAA and Armed Forces Bank are dedicated to taking care of their customers while not compromising the security and safety of their accounts," said Steven Lepper, executive director of AMBA. “This is a delicate balance, which is made more difficult when you have only one bar of battery left on your phone."

Specialized solutions are needed to meet the challenges faced by service members. Their schedules are unpredictable, they move often, and they are often far from their banks.

When financial institutions renew their leases on military bases, they face rent increases. Despite these realities, many financial institutions have turned to digital means for interacting with their customers in the armed forces. COVID-19 has only accelerated the trend toward digital banking in civilian society.
Recent months have seen the launch of products by military banks and credit unions, which utilize technology to meet the unique needs of their customers. For example, Andrews Federal Credit Union in Suitland, Md., has encountered difficulties with currency conversions.

The extra step requires Andrews to use an exchange rate determined by the Department of Defense, which results in several business days for payment processing.

According to Rachel Rust, vice president of European operations at Andrews, an asset management firm with a $2.2 billion market capitalization, "We identified a need to serve our member bases better. How can they pay in the same way as locals?"

An agreement between Andrews Group and Wise, a provider of digital remittance services, was announced in October. The deal permits members to send and receive payments in foreign currencies, and the exchange rate they offer is approximately two to three cents better than that set by the Department of Defense. In addition, Wise will also be used when credit union members forget to pay a bill from a previous assignment but have already closed their old on-base account in that country.

As part of a branch redesign completed in June, the credit union implemented a "union station" where employees can conduct online and mobile banking tutorials using touchscreens.

In 2020, the Army Bank in Fort Leavenworth, Kan., embarked on a digital transformation that continued in 2021. You can access the bank's online and mobile banking services through Zelle transfers, mobile check deposits, card controls, and a chatbot, Mili, which offers users the opportunity to speak with a personal banker.

Financial institutions can meet customers in a digital environment and switch between modes of communication, such as voice, text, and video, with the help of GLIA.

There was a need for these changes. Dickinson Financial, the bank's parent company, has branches located on 17 military installations across the country. However, military personnel does not always live at their bases.

Over time, branch activity has declined, and a military lifestyle that is unpredictable calls for the flexibility that digital banking offers.
Armed Forces Bank's director of military consumer lending, Jodi Vickery, says the military is not always in control of how it spends its time.

Taking advantage of alternative data such as bank account information for underwriting, the bank launched its first fully digital loan in 2021, the Access Loan. Military applicants, whose lifestyles may result in a complex credit picture and cause issues beyond their control, would benefit from this policy.

When you move every two to three seasons, you may have an unpaid electric bill that does not reach its destination, and you have a collection item on your credit report, Vickery said.

“We like the fact that it has a high proportion of auto-decision capabilities,” Vickery said. Throughout the night, we have had clients go from application to funds in their accounts within four to five minutes."

USAA has a long history of innovation in technological fields. In the early 2000s, the company, which holds over $117 billion in assets through its banking arm, began developing low-bandwidth versions of its mobile applications and website for members living in remote locations with limited Internet access.

USAA stated that its culture and the particular needs of its members drive its innovation.

AMBA is currently working on products that will assist veterans in safely managing their finances. The company is collaborating with Moca, which issues payment cards and allows users to store cash on a debit card and protect their balances with extensive card controls.

According to Lepper, "These products that allow you to safeguard your money are ones that we wish to develop more for the military community."

The use of some technologies initially developed for military customers has found its way into the banking sector. Examples include remote deposit capture.