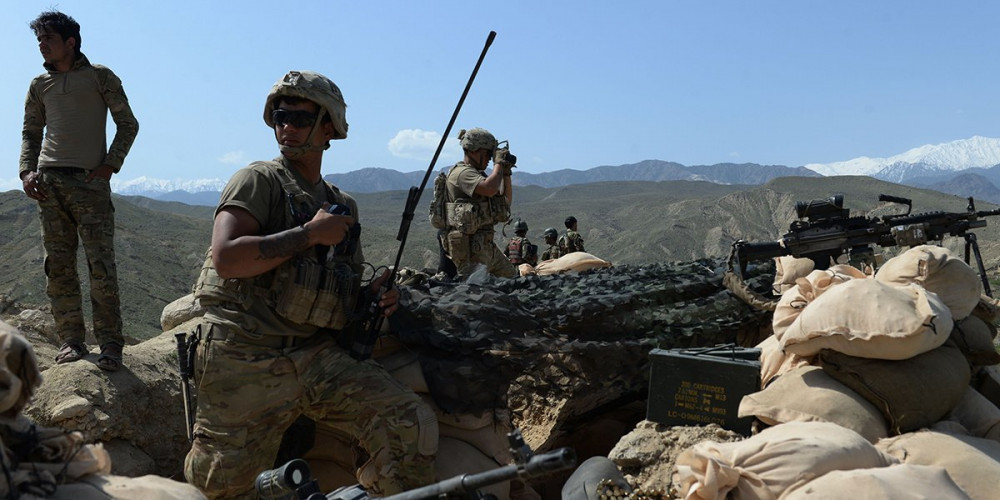 If the U.S. military's historic airlift evacuation of tens of thousands of civilians from Afghanistan wasn't complicated enough, a new potential wrinkle has emerged: the Islamic State.

NBC News, citing defense officials, reported Saturday that the U.S. is tracking specific threats from ISIS against Americans, Afghans, and others trying to leave Afghanistan through Hamid Karzai International Airport in Kabul, and against the airport itself.

And on Sunday, White House National Security Adviser Jake Sullivan told CNN, "The threat [of potential ISIS attacks] is real, it is acute, it is persistent, and it is something that we are focused on with every tool in our arsenal."

The U.S. and other allied militaries are maintaining a truce -- one that is shaky and tense, yet so far holding -- with the Taliban forces who now control the country and encircle the airport. U.S. commanders also are speaking with Taliban counterparts outside the airport daily to deconflict and try to ensure civilians can reach the facility.

But the Islamic State affiliate ISIS-Khorasan has made no such agreements. ISIS-K and the Taliban are enemies who have battled each other in recent years, and the newer group may view the tumultuous evacuation as an opportunity to strike, both harming the U.S. and embarrassing the Taliban.

In a briefing with reporters Monday, Pentagon Press Secretary John Kirby declined to comment on specific intelligence about threats but said the military is monitoring and keeping in mind the threat ISIS poses.

"Without speaking for the Taliban, I think it's a safe assumption to assume that they too are mindful of that threat," Kirby said.

He declined to discuss what might happen or how the military might respond if ISIS launched terrorist attacks on the airport's perimeter, or the civilians trying to get inside.

Sullivan told CNN that commanders on the ground have many ways to defend the airfield against potential terrorist attacks, and stopping or disrupting them is a top priority for the administration, including intelligence agencies.

"We are taking it absolutely, deadly serious," he said.

In a sign of how dangerous the security situation remains, a gunman opened fire Sunday night outside the airport's north gate, targeting Afghan security forces there. The Afghans, U.S., and coalition troops returned fire. One Afghan soldier was killed and several others were wounded, but have been treated and are now reportedly in stable condition, U.S. Central Command said. No U.S. or coalition troops were reported wounded.

It remains unclear which, if any, group the attacker may have been affiliated with.

The U.S. hopes to complete its evacuation and withdraw from the airport by Aug. 31 and has expressed optimism about the chances of meeting that deadline. However, President Joe Biden has left the door open to extending the mission if not all Americans are out by then.

But the Taliban has ruled out extending the evacuation process into September and threatened "consequences" if it happens. In an interview with Sky News, Taliban spokesman Suhail Shaheen called an extension a "red line" and said it would mean the U.S. is "extending occupation."

"If the U.S. or U.K. were to seek additional time to continue evacuations, the answer is no, or there would be consequences," Shaheen said.

In Monday's briefing, Kirby said the Pentagon had seen the Taliban's comments on an extension.

"I think we all understand that view," he said, adding that the military is working as fast as it can to evacuate as many people as possible.

Over the weekend, the Pentagon enlisted commercial airlines' assistance with the evacuation by activating the Civil Reserve Air Fleet.

By Monday morning, 18 aircraft from six commercial airlines had been activated to help ferry evacuees from intermediate stops outside of Afghanistan to the U.S., though military aircraft are still taking the lead on flying people out of Kabul. Intermediate stops include U.S. facilities in Qatar, the United Arab Emirates, Kuwait, Bahrain, Italy, Spain, and Germany.

Since Sunday morning, the U.S. military had flown 25 C-17 Globemaster IIIs and three C-130, Hercules, out of Kabul; another 61 charter, commercial and other military flights also departed the airport. The U.S. military transported nearly 11,000 personnel on its flights, and other aircraft carried more than 5,000, for about 16,000 in all. The military has flown out roughly 37,000 people since the evacuation effort began Aug. 14.

This news has been sourced from https://www.military.com/daily-news/2021/08/23/isis-threats-taliban-red-line-against-extension-complicate-afghanistan-evacuation.html