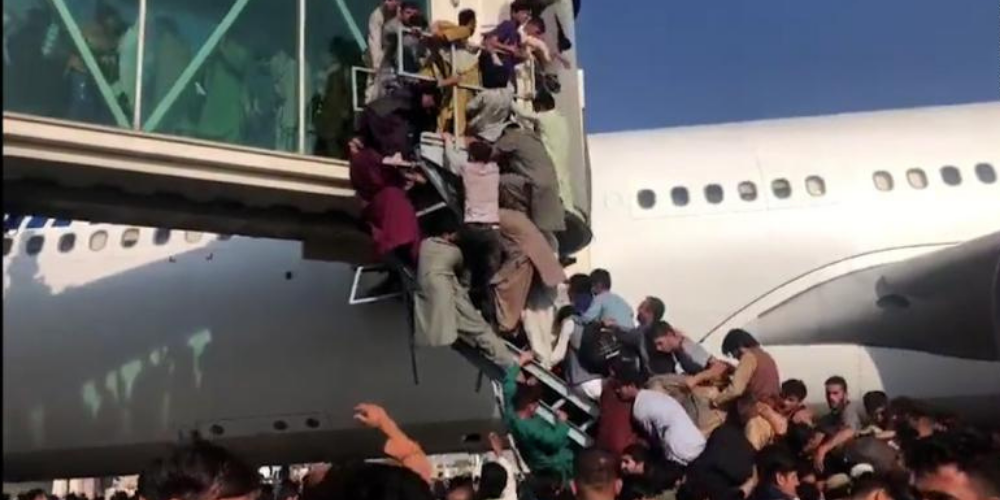 U.S. Army Maj. Kristen Rouse deployed three times to Afghanistan and worked extensively with Afghan partners while she was there. Now, following the Taliban's seizure of Kabul, Rouse is hearing from those same Afghan partners with whom she served shoulder to shoulder — and they're terrified.

She's part of a group called Iraq and Afghanistan Veterans of America. She said seeing images of the Taliban entering Kabul brought to mind the sinking of the Titanic.

"But knowing that only the crew are getting the lifeboats," she said. "And then for all of our friends who are in the water about to die, they are reaching out to us on social media, telephone, in every way that they can, to beg us, to beg us for lifeboats."

In 2020, Rouse spoke to NPR's Morning Edition about the proposed U.S.-Taliban peace deal and the hope she maintained for the future of her Afghan partners. Since the Taliban's rapid takeover with the fall of Kabul on Sunday, she talked to Morning Edition again about what she has been hearing from other U.S. veterans and her former Afghan partners.

Below are excerpts of her conversation with NPR's Steve Inskeep, edited for length and clarity:

On whether she has heard directly from people:

Yes. Some of them have been in a yearlong process to get interpreter visas, the [Special Immigrant Visas], which is just an agonizingly bureaucratic process. And there have been many delays, denials, and folks can't get visas at this point. They can't even get passports. And they are begging. They're begging for a way out.

On people who have been trying for years to get visas to come to the United States:

Yes. One interpreter, one of my interpreters, in particular, he's been trying different things for really the last, the last decade. And I've been messaging with him for many years, trying to figure out other options, other ways to help him. And there's, there's been just an endless series of dead ends, walls, attorneys telling me that they can't do anything. The Taliban are, they are, as I speak, going door to door to identify individuals who have worked at any time with the U.S. Yesterday, I got a final message saying, "I am about to die." I mean, "If something bad happens to me, I will ... I will see you in heaven," and I'm not the only veteran. I've spoken with other veterans who are getting goodbye messages like this. People believe they're going to die.

On whether she feels a personal responsibility:

Absolutely. I made promises to people. I said, "You are working with us; we will do all we can." And, you know, I'm one veteran connected with people. And I'm not; I'm not seeing where we have answers, where we have answers or a way out for the people that did good work for us. We could not have done any of our missions, any of our missions in Afghanistan at all. We could not have done anything in Afghanistan without local interpreters, you know, other workers who sustained us, who worked on our bases, who worked with [nongovernmental organizations], who worked with, you know, these humanitarian aid organizations, who taught in schools, who worked in government and education and judicial structure. I mean, so many Afghans believed in what we were doing; we believed in what we were doing.

On if anyone who embraced the U.S. attempts to build a democracy in Afghanistan is at risk:

On whether she was surprised at the speed the country fell to the Taliban:

On those who question whether Afghanistan has the political will to fight back against the Taliban:

I don't ... I mean, I can't speak directly to that. But I am just heartbroken that we are just blaming people who've had their lives on the line and have been sacrificing with us for years. And suffering. It's unreal to me that we would suddenly walk away from intense partnerships, saying, well, "You couldn't make it on your own. Too bad."

On what remains of these 20 years of effort in Afghanistan:

I believe that the investment we made was in people. We built friendships. We built relationships. We made promises. We helped give structure and opportunity to so many Afghans who were able to have hope, who could build, who can do things on their own, and the Afghans were working very hard for all of those 20 years. I believe if we're going to preserve any of that investment, we need to preserve human life; we need to preserve the people so that they can keep building.

It's really hard ... and, you know, ultimately, while people are alive, we have to believe that we can keep them alive; we have to try. We owe it to them to try.