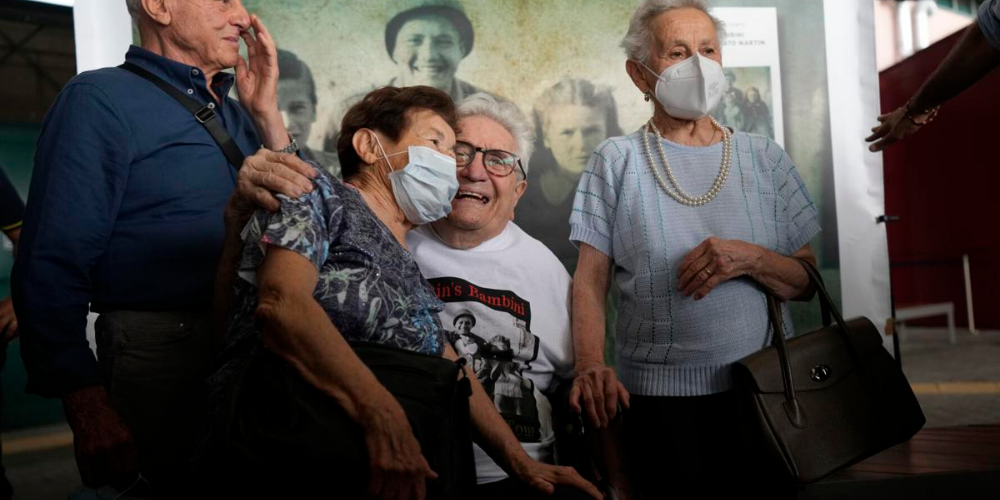 97-Year-Old U.S. Veteran Reunites with Italians Who He Saved During WWII. For more than seven decades, Martin Adler treasured a black-and-white photo of himself as a young American soldier with a broad smile with three impeccably dressed Italian children he is credited with saving as the Nazis retreated northward in 1944.

On Monday, the 97-year-old World War II veteran met the three siblings — now octogenarians themselves — in person for the first time since the war. Adler held out his hand to grasp those of Bruno, Mafalda and Giuliana Naldi for the joyful reunion at Bologna’s airport after a 20-hour journey from Boca Raton, Florida. Then, just as he did as a 20-year-old soldier in their village of Monterenzio, he handed out bars of American chocolate.

“Look at my smile,” Adler said of the long-awaited in-person reunion made possible by the reach of social media.

It was a happy ending to a story that could easily have been a tragedy.

The very first time the soldier and the children saw each other, in 1944, the three faces peeked out of a huge wicker basket where their mother had hidden them as soldiers approached. Adler thought the house was empty, so he trained his machine gun on the basket when he heard a sound, thinking a German soldier was hiding inside.

“That was a real hero, the mother, not me. The mother was a real hero. Can you imagine you standing yourself in front of a gun and screaming, ‘Children! No!’” he said.

Adler still trembles when he remembers that he was only seconds away from opening fire on the basket. And after all these decades, he still suffers nightmares from the war, said his daughter, Rachelle Donley.

The children, aged 3 to 6 when they met, were a happy memory. His company stayed on in the village for a while and he would come by and play with them.

Giuliana Naldi, the youngest, is the only one of the three with any recollection of the event. She recalls climbing out of the basket and seeing Adler and another U.S. soldier, who has since died.

“They were laughing,” Naldi, now 80, remembers. “They were happy they didn’t shoot.”

She, on the other hand, didn’t quite comprehend the close call.

“We weren’t afraid for anything,” she said.

She also remembers the soldier’s chocolate, which came in a blue-and-white wrapper.

“We ate so much of that chocolate,” she laughed.

Donley decided during the COVID-19 lockdown to use social media to try to track down the children in the old black-and-white photo, starting with veterans’ groups in North America.

Eventually, the photo was spotted by an Italian journalist who had written a book on World War II. He was able to track down Adler’s regiment and where it had been stationed from a small detail in another photograph. The smiling photo was then published in a local newspaper, leading to the discovery of the identities of the three children, who by then were grandparents themselves.

They shared a video reunion in December and waited until the easing of pandemic travel rules made the trans-Atlantic trip possible.

“I am so happy and so proud of him. Because things could have been so different in just a second because he hesitated, there have been generations of people,” Donley said.

The uncertainty isn’t lost on Giuliana Naldi’s 30-year-old granddaughter, Roberta Fontana, one of six children, eight grandchildren, and two great-grandchildren who descended from the three children hidden in the wicker basket.

“Knowing that Martin could have shot and that none of my family would exist is something very big,” Fontana said. “It is very emotional.”

During his stay in Italy, Adler will spend some time in the village where he was stationed before traveling to Florence, Naples, and Rome, where he hopes to meet Pope Francis.

“My dad wants to meet the pope,” Donley said. “He wants to share his message of peace and love. My dad is all about peace.”