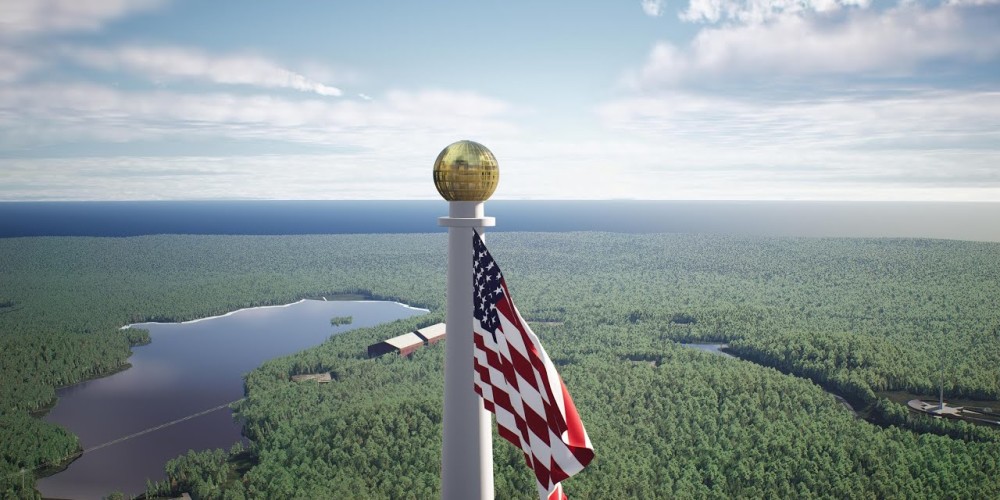 The Worcester family is behind the annual Wreaths Across America campaign that places wreaths on the graves of fallen soldiers and veterans. Two weeks ago, they announced new plans to build what would ultimately be a $1 billion park on their land in Washington County.

It's a plan that has drawn praise, curiosity, and criticism.

The park would be fairly remote, about an hour-and-a-half from Bangor and from the Canadian border. We went to Columbia Falls to see for ourselves what the Worcester family has in mind.

Morrill Worcester is the founder of Worcester Wreath Company in Columbia Falls. His plan would turn part of his land of balsam firs into a destination by July 4, 2026.

The first phase of the proposed project includes a 1,461-foot flagpole, which would be the tallest in the world, complete with an elevator ride to the top, memorial walls honoring some 24 million U.S. veterans, an amphitheater and concert space, and trails for campers and hikers.

"The whole park will take 10 years, but we want something that would happen around the 250th birthday of the country," Rob Worcester, Morrill's son, said.

Both Rob and Morrill admit it's an ambitious plan, but it's one they've been working on for 13 years. Still, running a business, the Worcesters know how difficult it is to fill jobs right now. The proposed construction project would fill an estimated 3,000 jobs.

Where would those hires come from?

"We think that full rollout build-out will be 10 years," Rob said. "So we have some time to recruit and bring people in."

Those 3,000 workers are needed just to build the park, which the Worcesters think could ultimately employ around 12,000 people full-time once complete.

"We want as many people who live here now to be able to work in the park if they’d like," Morrill said. "They’d be very good jobs. They'd be year-round jobs. But we also know the population is not here to man the entire park, so we’re going to have to go all across the state, maybe even into southern New England, to recruit people to come here and work on this."

Where would those people live?

"A lot of the accommodations that are built will originally house the workforce," Rob said. "That will eventually become rental spaces and things like that for people that are on vacation."

The Worcesters' plan includes hotel rentals, cabin rentals, and camping spaces. During the summer, there would be free trails for the public to explore the surrounding woods. In the winter, the trails would have nordic skiing and snowshoeing access.

What’s unusual about the project is that it will not be a charity, but the Worcesters are fundraising for the build. That fundraising includes a "park foundership program." The first few people to donate between $660 and $1800 gain lifelong access to the park and have their names honored within its walls.

"If we’re not totally successful and we don’t reach 25% of the money needed to make this happen, we will honestly have to refund that," Morrill said. "We don’t want to spend somebody’s money if it’s not going to be built. But, we feel - and it’s really looking good at this point - that this will happen."

The billion-dollar project is still in the planning phase. The Worcesters showed us the land and some roads being built just so that surveyors and engineers can access the area. While the family has been working out this plan for more than a decade, it came as a surprise to others who say, "Why Washington County?"

We posed the question to Washington County Commissioner Chris Gardner.

"I think it’s important to note that this is a private endeavor, and we recognize what the Worcesters are trying to do here is a monumental task both literally and figuratively, and it is in our nature, unfortunately, to try to find the reasons not to do something," Gardner said.

Gardner said that Washington County saw an increase in visitors throughout the pandemic as people looked for more scenic sights away from crowds. Still, it's not a heavily populated region, so is there a way to bring 12,000 new jobs into Washington County without changing it?

"I like to say we’re going to file that under good problems," Gardner said. "The fact of the matter is we look at our population of Washington County as what it is, and we somehow think that’s what it always was. I do a lot of work in Eastport. The population of Eastport today is 1,300 people. At the turn of the century - 1900 - there were 5,000 people in Eastport Maine. So this idea that somehow bringing more people to Washington County is going to somehow change who we are, the reality is it might allow us to get back better to who we once were."

One big criticism NEWS CENTER Maine noticed on social media as viewers reacted to the project announcement was that $1 billion could go a long way toward helping living veterans.

Take Maine's Veterans' Homes, for example. According to data we found, that amount of money could house more than 24,000 veterans for one year. Since funding for the park would come from private funds, we asked the Worcesters how it would benefit veterans beyond being a site for them to visit.

"It doesn’t fit the mold to be a nonprofit, but that’s a benefit because now we can take the profits and share with those veterans' causes," Rob said. "So instead of competing with those causes — which there are 45,000 veterans causes around that subject and they’re doing great things supporting homeless veterans, feeding homeless veterans, all these different things that they’re working on — we would align with those, choose some of those to support with our profits. That also gives us the best opportunity to sustain this over a long period of time. So, I think we can provide a lot of benefit to those organizations."

"It’s not going to be federal money, state money, or anything like that. This is a group of people who are interested in what we’re trying to do and coming together and trying to do something good," Morrill said. "Lord willing we make some money, we will share that with the ones who need the money who are doing great things around the current living veterans."

We reached out to the Maine Bureau of Veterans' Services for their reaction to the park and received this statement in return:

"Maine Bureau of Veterans' Services appreciates all efforts in recognizing the service and sacrifice of all individuals that have served in our military branches, past and present. Private organizations have the ability to direct their efforts to the areas they are most interested in supporting. The Maine Bureau of Veterans' Services continues its focus on Federal, State, and local partnerships to address the immediate needs of Maine's current and former service members."

Along with their park plans, the Worcester family said they are looking into other access roads to limit the congestion this could bring through Route 1.